Is Charlie Manson's "Helter Skelter" lurking in the White House? 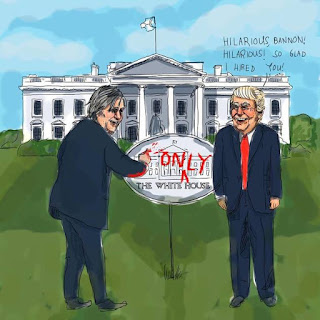 Steve Bannon, Donald Trump's chief strategist and top adviser, has already established his credentials as a white nationalist, racist and anti-Semitic. As an avid reader, he espouses to "The Fourth Turning, a book by William Strauss and Neil Howe, that history unfolds in cycles of 80 to 100 years. At the end of the cycle, the old order is destroyed and replaced." It would appear that Stevo plans to be there at the end of the cycle and implant the Trump/Bannon, perhaps the other way around, vision of common national purpose Trump announced in his first address to Congress on Monday.

As far as the speech goes, it was well received by Republicans as one would suspect but Sen. Chuck Schumer's comment was that, "Trump's speeches and the realities are very, very far apart. Until his reality catches up with his speeches, he's got big trouble," Others said he even looked a bit presidential, hoping he might maintain that and not revert to the crude behavior he has exhibited on Twitter and otherwise since entering office. But these hopes were born and played out before and it only took one news cycle to send Donald John romping down the crass road to vulgarity again.

Here are some comments by Lacy MacAuley, an activist and member of the Washington DC Antifascist Coalition...


"I absolutely think Steve Bannon is connected to a network of white nationalists. Just in the last few years there have been contractual obligations between white supremacist James O’Keefe at Project Veritas and Breitbart."

"Mr O'Keefe was known, she said, for taking down institutions and organisations via fake news."

"I would say that Steve Bannon is the advocate for white nationalism in the White House and there’s no doubt in my mind on that. It’s not just through Breitbart, it’s through his entire line of work."

There is the indication that Steve Bannon, when recruiting to fill out the National Security Council position, added himself to the NSC without Donald John knowing. Grounds for dismissal by most anyone, except someone with a hidden agenda. He was able to do this since he was the one writing the Executive Order, not Trump. The President was pissed but the fact that Bannon stays put is evidence of just how powerful the man is. Daryle Lamont Jenkins, executive director of the anti-racist organisation One People's Project exclaims...


"We've been dealing with a cluster of white supremacists within the beltway of the Washington DC area who do just that (using theories and academia to justify their racism): they try to back up their racism and justify why they should have a separation of the races, and justify a more strident attack on African Americans in the name of 'fighting crime'."

That's about as scary as it gets. Beginning to sound like Charlie Manson's Helter Skelter, starting a war between blacks and whites. Charlie was a confirmed white supremacist who went to the extreme of carving a swastika into his forehead with a knife. He had a following he mesmerized by convincing them that he was Jesus Christ, turning them into killers that would do his bidding. I'm not saying Steve Bannon is another Charlie Manson, but I am saying that Donald Trump, normally a man who seems to need no one, is definitely enthralled by Stevo's philosophies. That's what's scary.

The UK Independent reports that last July Breitbart had "...become the 'platform for the alt-right'. Now his platform has become the government." Well, that's even scarier. Donald John has been guilty of racially insensitive remarks in the past, and during his campaign refused to condemn the white supremacists who advocated for him, like David Duke and Richard Spencer. Here are some examples during his drive for the presidency...

Just a few, but you can see more here. Huff Post says in a blazing headline, "President Trump’s VOICE Is About Justifying White Supremacy." VOICE means, Victims of Immigration Crime Engagement. So far it sounds like...

"...the program will be limited simply to undocumented immigrants, but will also include crimes committed by legitimate VISA holders, Green Card holders and possibly even permanent residents who are not naturalized citizens.

But then HP blasts, "Let’s call this what it is: VOICE is racist government propaganda." And isn't it interesting that Steve Bannon, formerly of Breitbart, had a section called Black Crime, which documented the crimes of immigrant communities, when it is known that immigrants are actually less likely to commit a crime than non-immigrants. Brian Stone of Huff Post adds...


"Creating this hate-list will do nothing except provide official government sanction to the opinions of white supremacist groups and the alt-right."

Remember Pat Buchanan, a presidential wanna-be from 1992, 1996 and 2000, who ran on a platform of right-wing populism and who also was a white supremacist? As far back as 2015, he was backing Trump along with other white supremacists, including David Duke. Buchanan regretted what he called the end of white America "...due to immigration and increasing rights for people of color." This is a statement that is hard to believe coming from someone who is supposedly educated and worldly. It can only be attributed to someone who is a true racist and white supremacist.

Most of this crowd doesn't believe in violence, a fact that is not true of Trump’s rank-and-file supporters. One such Donald John follower was Dionisio Garza III, 25, also a Muslim hater, who went on a shooting spree back in early 2016 in Houston, leaving one dead and six injured. In another instance...


"Jim Sherota, 53, [who]works for a landscaping company and attended Trump’s rally in Mobile, Alabama, on Friday, [August 2015] told The New York Times before Trump’s arrival that he hoped Trump would announce a plan to issue licenses for hunting undocumented immigrants and offer $50 for 'every confirmed kill.'”

A bounty? Now that's interesting because back in 2015 just escaped El Chapo placed a $100 million
bounty on Donald Trump's head when the then candidate accused the Mexican government of letting him go tweeting...


"El Chapo and the Mexican drug cartels use the border unimpeded like it was a vacuum cleaner, sucking drugs and death right into the U.S."

Jake Tapper of CNN pushed Trump to disavow David Duke and rebuke any vote from him or any other white supremacists. It was a typical brainless meandering by the candidate...


"Trump claimed that he didn’t know anything about white supremacists or about Duke himself. When Tapper pressed him twice more, Trump said he couldn’t condemn a group he hadn’t yet researched."

A Virginia leader of the Ku Klux Klan told a TV reporter, “The reason a lot of Klan members like Donald Trump is because a lot of what he believes, we believe in.” And that's the scariest yet. In closing, here is a list of his "white supremacist fan club" compiled by Huff Post reporters...


"The Daily Stormer, a leading neo-Nazi news site; Richard Spencer, director of the National Policy Institute, which aims to promote the “heritage, identity, and future of European people”; Jared Taylor, editor of American Renaissance, a Virginia-based white nationalist magazine; Michael Hill, head of the League of the South, an Alabama-based white supremacist secessionist group; and Brad Griffin, a member of Hill’s League of the South and author of the popular white supremacist blog Hunter Wallace."