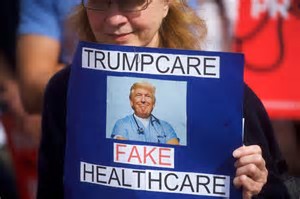 It looks like it so far. House Speaker and number one cheesehead, Paul Ryan got shot down again, with him and his group looking at the piece of shit they call a healthcare plan. They pulled it from consideration, rocky Ryan stated, or as the greatest of leaders said, “We just pulled it,” with emphasis on the "We." What this means is that The Affordable Care Act continues to reign supreme for now. It was Donald John's ultimatum on Thursday, either pass our bill on Friday or Obamacare stays. This is just another in a long line of failures for both Donald Trump and Paul Ryan. Time to dump em both!

With this defeat, it is uncertain now if T-rump will be able to push through his aggressive agenda of changing how the government works now to his way. This statement from a Republican who planned to vote for the new GOP healthcare plan is a real downer for the Party...


"Rep. Bradley Byrne (R-Ala.), who planned to vote for the legislation, said that Friday would have been the 'first big vote in the presidency of Donald Trump. I think it’s a statement, not just about him and the administration, but about the Republican Party and where we’re headed.'”

Is Byrne admitting the Party has no idea where it's headed, or is he just another befuddled Republican? I vote for both, but as this all becomes more challenging for the GOP, yet more enticing for Democrats, the country goes to hell. The future will be interesting in illustrating the ability of the United States to withstand the likes of a Donald Trump, measuring its capacity to survive in this environment, and see just how long it will take to awaken a dull and apathetic public. America is a strong country but unconscious, uninformed voters have never put us in this position before.

Paul Ryan ontacted every skeptical voter and "Trump had personally lobbied 120 lawmakers, either in person or on the phone," but all for naught. It went down like the Hindenburg, and not because of Democratic opposition, but due to Republicans that think their Party's attempt at replacing The Affordable Care Act is inadequate. Even Vice President Pence, White House Chief of Staff Reince Priebus and Health and Human Services Secretary Tom Price jumped into the foray, but the hard-line House Freedom Caucus thought changes made would “raise serious coverage and cost issues.”

If you look closely at the Washington Post article, and it is a good read, you'll see very little participation by Democrats. As a matter of fact, here's one of the few, “You never intended for there to be a health plan of consequence for this nation,” said Rep. Alcee Hastings (D-Fla.)." He added, “What we will have done is helped rich people. And we will not have helped poor people.” Bingo, and I don't think that is really surprising, just the anemic left trying their best to get on record with the facts. It was really Bloomberg that put it all into perspective after Trumpcare was dumped Friday...


"We should pause and realize what a big deal this is. The number one agenda item for years, the one that most House Republicans campaigned on when first elected, and they couldn't manage to even get an initial bill out of the House. Not only that, but it was clear this week that even though most of them were willing to vote for it, practically no one was enthusiastic about what they had produced. It also polled terribly, and conservative health care wonks hated the bill."