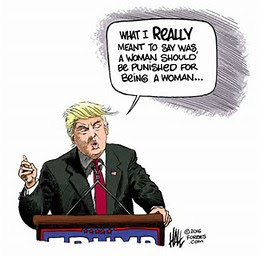 Well, it's common knowledge what Donald trump thinks about women from the statements he made during the 2016 Presidential campaign. Remarks like...

"About Rosie O'Donnell he said that she was 'disgusting, both inside and out' and that if he were running her show he'd 'look her right in that fat, ugly face of hers and say, 'Rosie, you're fired.'"

He said about Carly Fiorina, "Look at that face. Would anybody vote for that?"

There's more you can see here but the above shows clearly Donald Trump's disdain for women.

Fast forward to Donald John's first address to a joint session of Congress when he "...promised the American people that he was going to spend his term granting wishes..." then added. "...that he’d invest in women’s health." But along came the emperor's new budget which made his promises look like Pinocchio with a two-foot nose. Lower income and older women are hit very hard with womens' advocates contending...


"...that if the AHCA were to be enacted as-is, Trump’s promised investment in women’s health would be a comical falsehood."

You might say that this statement ["comical falsehood"] pretty much reflects the total of the Donald Trump experience so far. The Daily Beast has been condemning the monarch's budget through the interpretation of the Congressional Budget Office analysis released this past Monday. For starters...


"...24 million kicked off insurance and an additional $880 billion gouged from Medicaid, all in the name of a measly 1 percent reduction in the deficit."

DB says the numbers are really not representative because of the different math between Obamacare and the American Health Care Act. What it comes down to is the fact that this large number will lose their health insurance and older Americans will see increases they simply will not be able to afford. Daily Beast says...


"Allowing premiums for older people to shoot skyward means that a 64-year-old making $24,000 per year will see half of their income go toward the cost of covering medical insurance."

The outset is a family on the cusp of retirement that all of a sudden is bankrupted by their health care costs, and the Republican health care plan leaves them nowhere to turn. Here's another opinion...


“'[Republicans] are doing nothing to invest in women’s health,' Jamila Taylor, senior fellow at the Center for American Progress, a liberal think tank, tells The Daily Beast.
Taylor is particularly concerned with the one-two punch the AHCA gives low-income women and women of color."

And on the same subject, the GOP is hell-bent on defunding Planned Parenthood, the main entryway for low income women to get the health care they need. The Senate's biggest idiot, Joni Ernst from Iowa, has a bill to redirect their funds. Here's one reaction...


"'If passed, these bills will cause a national health care crisis, leaving millions with nowhere to go for basic care,' said Dana Singiser, vice president of public policy and government affairs for the Planned Parenthood Federation of America, in a statement."

As you can see, the "comical falsehood" has now turned into a serious tragedy, and it will all be on the head of Donald Trump.
at March 19, 2017