I am an ardent fan of George Orwell's work including, Animal Farm and 1984. Animal Farm is political satire at its best, depicting the unrest of the animals at the Manor farm because they are treated poorly. Mr. Jones, the farmer, was a mean and drunken man who exploited them, leading to a rebellion by the animals that eventually gets out of hand. It's a short read that will illustrate the kind of uprising that is imminent when people, or animals, are unhappy with their situation. Or their government. It's an issue I'll cover later using the book to draw similarities with the U.S.

But 1984 offers a multitude of possibilities for comparison with the new Donald Trump admin., even as it completes just over a month of tenure. The timing only emphasizes the number of conspiracy theories Donald John has been able to concoct in such a short amount of time. They are numerous and at times so bizarre that they defy the reality that the man that has just been elected to the presidency of the United States is the one who spawned them. It is more likely that we would expect such disjointed discourse from Jack Nicholson in One flew Over the cuckoo's Nest. Examples...


In none of these cases has Donald John come up with any corroboration for the statements he made, with the most blatant number five. This was where Trump cried to the heavens how much larger his inauguration crowd was than Barack Obama's in 2008, when independent photos proved him wrong. But the freakish behavior of Donald Trump isn't the basis for this post, rather just some background and sidebars to explain the aberrant nature of the man who has risen from mediocrity to the President of the most powerful nation n the world. And how Orwell's 1984 has its parallels.

This isn't the first post or article on this issue, there have been several, but, notably, believe mine is the first to use the Orwell Today site in drawing these comparisons and cross-referencing with Jackie Jura's excellent notes and correlations with the future. On March 5, CNN's headline blazed, "The President of the United States traffics in conspiracy theories," then goes on to document Donald Trump's ongoing perpetuation of lies and misinformation. Jackie Jura n Orwell Today has a section on "Conspiracy Goes Mainstream," which chronicles history's most unique conspiracies.

But time now to look at George Orwell and then Donald trump through the eyes of "Orwell Today." And the only way to begin is to start with Orwell's most imposing creation, Big Brother. It was the Proles who marched through the streets with placards celebrating Big Brother’s ability to 'Make Oceania Great Again.' Fast forward to the 2016 campaign when Trump followers with red hats were marching everywhere with signs that said, 'Make America Great Again.' Now Donald Trump is not Orwell's Big Brother, but he is the epitome of his oligarchs.

1984's Winston character tries to recall the past when everything had been better but today's world was the remnants of a society that was free and uncomplicated, unlike 1984, and the new world order where the world was broken into three super-states. Steve Bannon has three tenets on which he plans to build the new "Trumpism" and, although they aren't geographical like Orwell's three nations, they do represent the kind of one-nation ideology of a country that is at the current time highly divisive. They are Capitalism, nationalism, and “Judeo-Christian values.”


It was the plan of the 1984 autocrats to "Keep the Masses Down" in order to maintain a hierarchical society that could only be possible through the proletariat's poverty and ignorance. Although not directly related to Donald Trump, it is the policy of the Republican Party to amass the wealth in only a few (1% of the population) and keep the rest in the dark over what the Party is really doing, in order to maintain the blind votes of their followers. Like Orwell's world, Donald John and the GOP feel their complete survival depend on collectivism.

1984's "Ministry of Truth" must have been the prototype for Donald Trump's communications dept. with Sean Spicer playing the part of the book's character, Winston, whose job it was at the Ministry to take news items he received and turn them around to mean what the higher-ups in the Party wanted said. To be certain, the Ministry of Truth was only the front for a persisting procession of lies to the citizens of Oceania, tied in a neat bundle that, when exxhibited, was meant to be bona fide. Well, in 2017, as in 1984, there is nothing truthful about Donald John's Ministry of Truth.

Orwell's "Falsification of the Past" follows closely to the Ministry of Truth in the fabrication of any information that is granted to the public. If Trump doesn't like what has already been said, he will change it to fit what he wants. Like right after the inauguration when he removed the term "climate change" from the official White House website. In Oceania there was Oldspeak and "Newspeak," when translated corresponds to the civil tone coming from the White House during Barack Obama and earlier presidents, compared to Donald John's crude and sometimes lewd rhetoric.

PoliticoMagazine talks of the multitude of contradictions of Donald Trump: "Has anyone ever disagreed with Donald Trump more than Donald Trump?" The Inner Party in 1984 was governed by adherence to a common doctrine of "Doublethink," which means "the power of holding two contradictory beliefs in one's mind simultaneously, and accepting both of them." Here are Politico's examples... 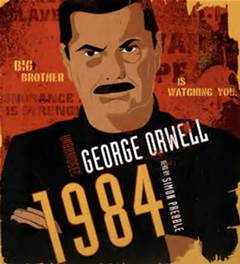 Orwell's "Ministry of Love" is like other of his poetic symbols that mean the opposite of what they
say. This one is actually a torture chamber for people who have been picked up by the Thought Police for thinking bad things against Big Brother. Now Donald John has no thought police per se, except for his minions who try to unsuccessfully control the media, but he does have a lot of love he spews on a regular basis, like how much he loves women. How much he loves immigrants. How much he loves blacks. And then he degrades each with a vehemence not found when expressing the love.

I could go on for some time but it will be much more interesting for you to browse Jackie Jura's Orwell Today site and come up with your own conclusions of how George Orwell's book, 1984, corresponds with the idiocy of the Donald Trump administration. Check the 45 topics she has documented on the left-hand side of the site. and when you go to something like "Big Brother" be sure and take advantage of the notes and analogies she has referenced as they will often point directly to current events. Good Reading!