Is it possible Jeff Sessions is a bigger liar than Trump? 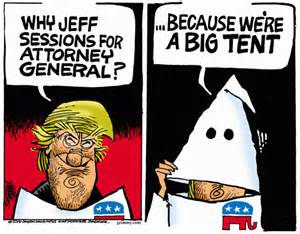 In the Senate hearings to confirm Jeff Sessions for Attorney general under the new Donald Trump administration, Sen. Al Franken (D-Minn) asked him a simple question of had he had contacts with the Russians. Sessions reply...


“I have been called a surrogate at a time or two in that campaign and I didn't have — did not have communications with the Russians, and I'm unable to comment on it."

Not only was he in contact with a Russian, he met with the Russian ambassador. And more than once. Nancy Pelosi, the House's minority leader, says that Sessions lied to Congress and must resign. Chuck Schumer, the Senate Democratic leader also called for Sessions to resign. When Sessions did everything he could think of to change his story and rearrange the facts, all of which still didn't work, he recused himself...


"...from any and all investigations into the 2016 campaign by the Justice Department, a clear attempt to throw a bone to the howling pack in hopes that the controversy would die down."

It didn't, has only gotten worse, and Donald John was reportedly furious for his action, enough to start the maniac on another tirade accusing Barack Obama of ordering the wiretapping of the Trump Tower during the 2016 campaign. Completely unsubstantiated...nada...zip to back it up. But then, that's Donald Trump, a part of his formula to spread misinformation about anyone who crosses him or disagrees with him. The other part of his formula is outright lies, a technique he has employed from the first day of his presidential campaign, perhaps all his business life.

One can understand why Trump would be frantic over Jeff Sessions recusing himself since it is no doubt his Attorney General would have overseen an investigation of the Russian impact on Donald Trump's winning the election. And we all know from experience that Sessions is simply another of Donald John's yes men, ready to do his bidding no matter what. So, what's next? According to CNN...

If they drag their feet...


"We will then urge (Senate Majority Leader Mitch McConnell) and (House Speaker Paul Ryan) to work with Democrats and create a new and improved version of the independent counsel law, which would give a three-judge panel the authority to appoint an independent counsel," Schumer said.

Yeah, lots of luck on that. Here's what PoliticusUSA had to say about a McConnell reaction...


"Given his support for Trump, expect Majority Leader McConnell to resist calls for an investigation, but when even he has to admit that there are unanswered questions, the President has big problems."

With trump's luck so far, his star will rise even higher because his numb nuts followers will scream their fried President is being persecuted. So, if Congress isn't going to do anything and his supporters will only glory in their man's "maltreatment," what's left? Well, it comes down to an anemic left that has been so disjointed in the past that they can't even help themselves, much less try to bring charges against the President. I want you to understand that I do not take pleasure in the fact that, the dozing Democrats under Debbie Wasserman Schultz were grossly outsmarted by the Republicans. Pathetic!

Chuck Schumer and Nancy Pelosi calls for Jeff Sessions to resign have fallen on deaf ears in the Republican Congress and in the White House. The Washington Post's take on this says that, even as the democrats mount their opposition against Sessions, his own Party is faltering with some trying to dump him altogether, and others avoiding him in the cloak room. In politics, everyone knows the laws of survival and when you lie, especially in front of a Senate committee, your supporters have a tendency to shun any relationship with you. WP comments...


"If Sessions's response on Thursday morning was the best that he can offer to defend himself, you can expect that the few people sticking up for him right now will dwindle to his immediate family sometime very soon. And when you lose your friends while under heavy fire from your opponents in political Washington, it's almost always curtains."

Jeff Sessions and his spokeswoman have repeatedly tried to explain the whole thing away as a routine act of the Senator as a member of the Armed Services Committee. Sarah Isgur Flores, Sessions’s spokeswoman, said...


"Sessions last year had more than 25 conversations with foreign ambassadors as a senior member of the Armed Services Committee, including the British, Korean, Japanese, Polish, Indian, Chinese, Canadian, Australian and German ambassadors, in addition to Kislyak [the Russian ambassador]."

Neither the Russian ambassador, nor his spokesperson were available for comment but...


"The Washington Post contacted all 26 members of the 2016 Senate Armed Services Committee to see whether any lawmakers besides Sessions met with Kislyak in 2016. Of the 20 lawmakers who responded, every senator, including Chairman John McCain (R-Ariz.), said they did not meet with the Russian ambassador last year."


"...Sessions had tried to 'dramatically mislead' Congress. He stopped an inch or two short of calling his former Senate colleague a liar, but made it clear he thought Sessions had concealed the full truth from the Judiciary Committee at his confirmation hearing. “If there was nothing wrong” with meeting Ambassador Kislyak, Schumer asked, why didn’t he just come clean and tell the truth?'”

Schumer talks about a special counsel to investigate Jeff Sessions and the Beast thinks that idea willIn 1999 he was a key proponent of prosecuting then-President Bill Clinton for allegedly lying under oath when Clinton was accused of perjury over statements he made regarding his relationship with Monica Lewinsky. Shoe on the other foot.
"avalanche" now, even with Senators that aren't in deep Red states. The downside of all this starts with Donald Trump who nominated this second-rate politician who is an avowed racist, and who has a past that should haunt him in this issue.

Lindsay Graham said in a tweet, "If Jeff Sessions spoke with Russian diplomat, then for sure you need a special prosecutor." Another republican Senator, Rob Portman, from Ohio joined in the call for a prosecutor. Here's a kick. Some thirty years ago, Sessions was too much of a racist to be a federal judge but now all of a sudden he has become Attorney General of the United States, which is on a higher level than the judgeship he wasn't qualified for. Just what happened in those thirty years to better  certify him for this job? I think nothing.
at March 07, 2017