Trump cronies getting restless-Looking for blood? 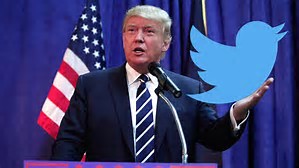 Are the good ole boys of Congress finally tiring of Donald Trump's incessant tweeting, making claims that he cannot back up, and putting the American government in the position of having to explain why we have a lunatic running the country? It would seem so when the Washington Post publishes a headline like this...

Here's a part of the accompanying Washington Post story...


"...a spokesman for House Intelligence Committee Chairman Devin Nunes (R-Calif.) threatened to subpoena the Trump administration to produce evidence of Trump's claim that President Barack Obama wiretapped Trump Tower during the campaign. The White House has declined to produce this evidence publicly, offering various excuses, including the Constitution's separation of powers and — most recently on Monday — arguing that Trump wasn't speaking literally when he made the claim."

And there's a downside to all this Twitter activity anyway. Apparently Donald John's aides have been deleting select tweets, which could be illegal, according to Reps. Jason Chaffetz (R-Utah) and Elijah Cummings (D-Md.), chairman and ranking member of the House Oversight Committee. They have sent a letter to Trump re. the "...administration’s record keeping habits and its nontransparent use of social media and other forms of electronic communication." This numb nuts thinks the office he holds means that he can do what he pleases, when he pleases.

Huff Post reports that, “The need for data security, however, does not justify circumventing requirements established by federal recordkeeping and transparency laws." It would appear that the confusion and chaos of this administration has finally reached the point that those high in government feel the free-wheeling has got to stop, or at least slow down. You can see Chaffetz and Cummings letter to the White House Counsel on the above HP site above. Speaker Paul Ryan has admitted that he does not believe the claim that there were wiretaps.

In addition to the letter from the two representatives, Devin Nunes had required the Justice Department to submit evidence to him of Trump's claim that President Barack Obama wiretapped Trump Tower during the campaign by this past Monday. When he didn't get it he indicated he might resort to a subpoena if it wasn't received by the committee's March 20 hearing. Now we can remember Congress threatening several actions against Barack Obama when he was in office, but it was the opposite party. In this case, it is all Republicans, supposedly Trump's party

Sen. Lindsey O. Graham (R-S.C.), who chairs the subcommittee looking into the wiretapping...

"...asked the Justice Department and the FBI to provide copies of any warrants or court orders related to the alleged wiretapping. Having not received anything, Graham said he may push for a special committee."

While all the GOP members who are supposed to be on his side continue to question the bizarre behavior of the White House wacko, loudmouth keeps right on tweeting away.
at March 16, 2017