Even the white nationalists are turning on Trump 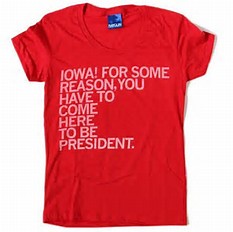 Iowa has always been the come-to state for Presidents and 2016 was no different for Donald Trump. He took the state 51.1% to win against Hillary Clinton's 41.7, garnering the 6 electoral votes. Des Moines, where I spent several years, went for Clinton as did another major metro area, Cedar Rapids. Iowans are considered good, down to earth, stable people with common sense. That's pretty much true as I can attest to after spending several years in the capital city, but also having experienced a hard-line cliquishness there that forbids outsiders in until proven. I never made it.

I left in the late sixties, never sorry for my decision, and have never looked back. I tell you this to qualify the fact that I am a maverick, always have been, and always will be. Mavericks don't do well in the state, although there is a basketball team there by that name who are apparently winners. But it is people like Tom Godat, a union electrician from Clinton, Iowa, that represents a state that has been a combination of Democrat and Republican in the past, but recently has been attacked by the Tea Party. It elected Joni Ernst to the Senate, something many in the state still can't believe.

But back to Mr. Godat, who has always voted for Democrats, decided to cast his vote for Donald Trump in 2016, not that he particularly thought Trump was best, but because he thought Hillary Clinton was worse. An excellent case in point to shore up the fact that Bernie Sanders should have been the Democrats nominee, not Clinton. Tom now says he is "embarrassed" over his vote. I would suspect that a lot of good people out there are also coming to the same conclusion. What I don't understand is, after viewing Trump's campaign, why wasn't Tom Godat horrified with what he saw?

There were Donald John's comments about Mexican immigrants, about women, about veterans, the disarming of Clinton's bodyguards, saying Obama was the founder of ISIS, sicking the gun nuts on Hillary, encouraging Russia to hack Clinton's campaign, more racism calling for a ban on Muslims in the U.S., saying people in New Jersey were cheering on 9/11, suggesting one of his protesters should be roughed up, referring to his daughter in a sexual way, his bizarre comments about Megyn Kelly's menstrual period, I could go on forever but you get the idea. Why didn't Tom Godat?

Washington Post reporter, Jenna Johnson, and her photographer, Michael S. Williamson, ran into "...more than 100 Iowans [who]explained why so many of them are already disappointed in the new president." It only took four days which means they encountered 25 a day. That's an impressive number of people when you consider that Iowans aren't that open and easy to get to talk to by people they don't know. And then there's Lost Nation, Iowa, where the president received 66 percent of the vote. After Trump's election, the Iowa legislature voted to dramatically scale back the collective bargaining rights of the state’s public workers, distressing my Lost Nation residents.

The Huff Post reports that "thousands" of people across the country are unhappy with their vote for Donald John, and they are tweeting it in response to the "head tweeter's" barrage of lies and misinformation. Here's an example...


“I’m starting to feel like the biggest mistake of my young 23 years of life has been voting for [Trump],” Joseph Richardson tweeted on Nov. 21. 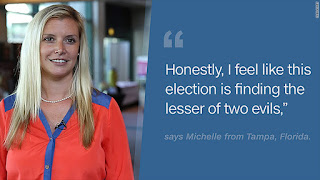 And that's less than two weeks after the November 8, election day. Richardson said it was a bitTrump’s Cabinet picks or the 'very childish' behavior he exhibited at a press conference last week. And he does regret his vote. Sort of." Even if he did it over, Richardson says he still couldn't vote for Clinton continuing with, “I still think Trump would be the better candidate. I’d still regret it. I’d vote for him again but I’d still regret it.” Go figure. But it is this exact kind of reasoning that political pundits were clamoring over during the 2016 election.
unsettling and added, "He doesn’t like

Now here's a guy you just have to shake your head over. Not sure if he is misinformed, full of indecision or just not too bright...


"Bill said he would like Trump to act more like President Barack Obama, who he voted against twice but considers 'an extremely honorable man who served the country fantastically.'”

I could understand a statement that said, served the country "well," or "fine," or even "right." But how can you call Obama "extremely honorable" and a man "who served the country fantastically" but still have voted against him twice? Makes no sense unless there is an ulterior motive. And that's what is wrong with our political system, people voting who haven't the slightest idea what they are doing. There were some that lashed out at Donald John for not following up on his promise to investigate Clinton’s handling of sensitive emails, a decision that also puzzles some of the pundits.

Others voiced their reason to vote for Trump was his promise for change, to drain the swamp. Many of this group think the swamp is fuller than ever, but others believe Trump is following through on his promises. Even the alt-right and its white nationalists are down on Donald Trump. Remember Richard Spencer? The guy "who stood at a podium shortly after Donald Trump's election and, in a video that went viral, shouted 'Hail Trump!' while several in the crowd celebrated the victory with a Nazi salute." He's not sure now his President will be racial enough.

From what I have read, a large number of Trump voters have combined to strongly object over the fact that Donald John did not investigate, subsequently prosecute Hillary Clinton over the email issue. This is a major campaign promise that he broke, and the fact that this is one of the primary annoyances of those who voted for the man, it is yet just one more instance that reflects the amount of animosity toward Hillary Clinton. This was clear from the early 2016 campaigning right through the November election. A leading reason Democrats are in the hole they are now in.


"Spencer is a white nationalist who believes that there should be a 'peaceful ethnic cleansing,' where people who are not of European descent voluntarily leave the United States."

Not that it is important since this deranged kind of thinking probably has no chance of ever being initiated in this country, but what if they don't leave voluntarily? But just maybe the thought of ethnic cleansing isn't so far out when you consider Trump has already provided the model in his latest Muslim ban of now six countries just announced in Monday's address to Congress. More from Slate on Bannon/Spencer connection...


"In August, [2016] Bannon proudly described his site as 'the platform for the alt-right,' a movement with Spencer as one of its intellectual leaders, again, according to Bannon’s own site."

It is said the Vice President is only a heartbeat away from the presidency. In the case of Steve Bannon, this is a heart beat that could change the direction of the greatest free nation of all time.