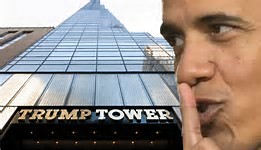 Donald Trump is in deep doo doo the Russian interference in the 2016 election and whether or not his election campaign staff was involved, while at the same time he must defend the lowlife Jeff Sessions he nominated for Attorney and a gutless Republican approved. So, does he do what any self-respecting individual would do--especially the President of the United States--build a palatable defense for each with facts? And since the world knows there is no defense for what has been done, what's left. Simple, we go on the offense with more lies and misinformation. Trump's tweet 3/4...


“How low has President Obama gone to tapp [sic] my phones during the very sacred election process. This is Nixon/Watergate. Bad (or sick) guy!”

First of all, the man is illiterate when it comes to spelling, and second, as has been the case with past accusations, he gives absolutely no proof. Here's what the master of handed-over misinformation, Sean Spicer, had to say 3/5...


“Reports concerning potentially politically motivated investigations ahead of the 2016 election are very troubling.”

What the hell are these people talking about? Fact checker asked for evidence of this "dramatic claim" but received nothing. The Washington Post reports that possibly Spicer's "reports" refer to news stories and not concrete information. But, "The Washington Post for months has sought to confirm this report of a FISA warrant related to the Trump campaign but has been unable to do so." More so, WP assumes other major news media have done the same and also come up empty. The gist of the matter is that month of FISA for information on Russian hacking have been denied.


"The FBI and five other law enforcement and intelligence agencies have collaborated for months in an investigation into Russian attempts to influence the November election, including whether money from the Kremlin covertly aided President-elect Donald Trump, two people familiar with the matter said."

"The agencies involved in the inquiry are the FBI, the CIA, the National Security Agency, the Justice Department, the Treasury Department’s Financial Crimes Enforcement Network and representatives of the director of national intelligence."

FISA court (Foreign Intelligence Surveillance Act), has been approached from about every direction including the former White House, for the purpose of uncovering Donald John's connection to the Russians in the 2016 campaign, not for the purpose of wiretapping Trump Tower. There is more investigation into how money transferred from the Kremlin "may have been used to pay some email hackers in the United States or to supply money to intermediaries who would then pay the hackers. More from McClatchy...


“A Trump presidency scares me more than anything else. I’m terrified that he’ll become president.”

This, of course, was pre-election, and sounds like he may be comparing the then coming election of Donald Trump with books of his like Carrie, It, and Misery. If you lump all of King's chillers together, they wouldn't equal the repugnance of the Trump administration. Stephen King likens the Trump presidency with his 37-year-old book, Dead Zone, about a salesman who fights the establishment to run for president. He doesn't make it but King has some interesting tweets mocking Donald John's charges over Obama's wiretapping of Trump Tower...


"Not only did Obama tap Trump's phones, he stole the strawberry ice cream out of the mess locker."

"Populist demagogues like He Who Must Not Be Named aren't a new thing; see THE DEAD ZONE, published 37 years ago."

It is pretty pathetic when one of the greatest writers of all time spends part of his valuable time to poke fun at the new president of the United states, not in a playful way, but to point out the absurdities and lunacies of this new administration. Avi Selk, in the Washington Post story once again reiterates...


An Obama spokesman and a former intelligence director said there was no wiretap. Some speculated that Trump was referring to claims on talk radio and the conservative website Breitbart that Obama used “police state” tactics against him. Others accused Trump of trying to distract from reports that his staff covered up conversations with Russian officials during the campaign.

On the legal side, FBI Director James Comey feels there is no credibility in Trump's claims that Barack Obama wiretapped Trump Tower phones and told the Justice Department to refute the charges. Donald John fired back refusing to "acknowledge" Comey's judgment, probably leading to some kind of confrontation with the head of the nation's leading law enforcement agency. The New York Times is leery of the fact that Trump would fire Comey because that could very well backfire into a cover-up over his campaign connections with the Russians.

Although Sean Spicer has made several comments stating Donald Trump's conclusion that former President Barack Obama did in fact wiretap trump Tower during the 2016 presidential campaign. He offered no evidence at the time, nor has Donald John since his accusations. Yet the two of them are adamant it happened. But not so sure are others in the White House, including Sarah Huckabee Sanders who pretty much hedges on most of Spicer's and Trump's allegations. This is why Spicer didn't really want to talk about this...


"During an at-times-painful interview with ABC's Martha Raddatz, Huckabee Sanders repeatedly suggested that Trump's allegation was worth looking into but declined to vouch for it. Raddatz pointed this out repeatedly, and Huckabee Sanders responded by saying 'if this happened,' 'if this took place,' 'if it did' and 'let's find out.'”


"Let me just say one more time. The president said, “I bet a good lawyer could make a great case out of the fact that President Obama was tapping my phones in October.” So the president believes it is true?"

HUCKABEE SANDERS: I would say that his tweet speaks for itself there.

In a nutshell, Donald Trump "trumped" up this conspiracy theory of Barack Obama wiretapping Trump Tower during the 2016 campaign, solely for the purpose of diverting attention away from the issues that he and his staff were in cahoots with Putin and the Russians in 2016 to aide his election chances and damage Hillary Clinton's, And the other issue, the skaggy lowlife he nominated for AG, Jeff Sessions lying about his contact with the Russians during the election. With a lack of support from his FBI Director, now some of his staff, where does the American public draw the line?
at March 08, 2017