What is the real reason that Trump hates the media? 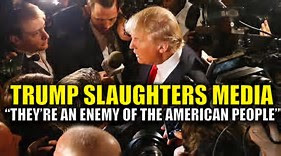 Donald Trump recently banned Journalists from CNN, The New York Times, The Los Angeles Times, the BBC, BuzzFeed, and Politico from a news conference. It was an informal question-and-answer session between a press secretary, Sean Spicer, and journalists, adding Breitbart, The Washington Times and One America News Network. The Daily Beast reports White House spokeswoman Sarah H. Sanders said: “We invited the pool so everyone was represented. We decided to add a couple of additional people beyond the pool for an expanded pool. Nothing more than that.”

She failed to add that in the addition there was also a subtraction, three of the largest media outlets in the country. Time and the Associated Press boycotted what was called a “gaggle,” with the AP commenting…

“AP believes the public should have as much access to the president as possible.”

CNN, The New York Times, The Los Angeles Times, the BBC, BuzzFeed, and Politico deemed the move “a troubling development” and “an affront to freedom of the press.” CNN commented further that it was their assumption if you report true facts, it is something the White House cannot handle. Considering Donald John’s first month in the Oval Office where there were 33 lies and misinformation spewing from his mouth on a daily basis, it’s surprising they continue to hold news conferences. It would be my guess the new president of distortion will set a record for untruths.

Here are a couple of comments...

"The New York Times executive editor Dean Baquet said 'nothing like this has ever happened at the White House in our long history of covering multiple administrations of different parties,' adding: 'Free media access to a transparent government is obviously of crucial national interest.'”

"Ari Fleischer, a Trump backer who served as White House press secretary for President George W. Bush, reacted on CNN by conceding that the decision to block certain reporters from the gaggle was 'unwise and counterproductive,' but added: 'There is nothing unusual about presidents meeting with self-selected reporters… and White House staffs do it all the time.' Fleischer echoed some conservatives who said the press largely overreacted to the way Friday’s briefing was handled, and defended Trump’s overall accessibility to the media."


“He [Donald John] is making journalism interesting and great again. It’s a fascinating time to be a journalist because he’s such a fascinating story. And he’s giving the press so much access.”

Can you believe that? Thought you had to have better than a double-digit IQ to be a press secretary. And it would appear Sean Spicer is following in Fleischer's footsteps. Bret Baier of Fox News surprisingly excluded himself from the gaggle, standing with those boycotted. The Wall Street Journal, although attending, said it would not participate in future press events if the administration did this again. The Daily Beast reported other instances...


"During the campaign, multiple news organizations including The Daily Beast, Politico and The Washington Post were blacklisted by the Trump team—barred from attending any campaign rallies, press conferences or other events."


Donald Trump's oligarchy is turning America into the likeness of countries like China, North Korea and Venezuela, with the outlook that he may try and push his power into that of an autocracy. And while the new White House despot attempts to turn our country into a dictatorship, his press secretary, Sean Spicer, is up for the worst of his kind to come along in the history of western civilization. When you consider that Spicer is the middle-man between the most powerful person in the world and the free voice of America; now, that's scary.

Spicer has been a favorite of "Saturday Night Live" recently and is beginning to look a lot like Kellyanne Conway in terms of the amount of misinformation he has thrown at the press. Conway has been chastised and virtually cut off by the media for her consistency of lies on the air, but reporters have nowhere else to go without Spicer. Unless they just stand around and wait on the leaks from the press secretary's office that apparently are frequent. So much so that Spicer had to call a special meeting recently to check staff electronics, including their phones, for evidence of leaks.

According to Jennifer Rubin of the Washington Post, Sean Spicer is ""...disliked and disrespected by superiors, peers and subordinates alike." Further, "He is so lacking in credibility as to diminish, if not eliminate, his utility in conveying the views of the White House or basic facts about what is going on." This all coming from a reporter from a major U.S. paper located in the nation's capital. Think about this for just a minute. There is a new President that continually hurls lies and misinformation, with his spokesman guilty of the same deeds. Where does that leave the American public?

Especially when they have been told by the Oval Office ogre that the media is the enemy of the people, and some, meaning Donald John supporters, either don't have the intelligence to or simply refuse to realize that this man is a lunatic and shouldn't be believed. In making this unpatriotic saying to the Conservative Political Action Committee for the umteenth time, the President castigated reporters for using anonymous sources and said we are going to do "something" about it. He did not indicate what "something" was, all as if the man is completely oblivious of the 1st Amendment.

If the dictator is planning to do something about dealing with anonymous sources, he'll have to clean his own House first. It was only two hours before Trump criticized anonymous sources at CPAC, exclaiming all sources should be named when, "... an administration official provided a briefing on condition he not be identified," according to USA Today. And here's another quote...


"William McRaven, the retired admiral who planned the 2011 raid that killed Osama bin Laden, said this week that Trump's attacks on the media may also be undermining democracy itself."

Now let's be honest, there are times the media overdoes a story; as a matter of fact, this was true in 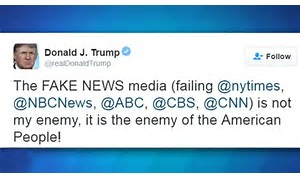 the coverage of Donald John in the 2016 primaries and election. As I recall, there was one evaluation of Trump coverage vs. Bernie Sanders and it was something like 200+ impressions for Trump, about 7 for Sanders. Hillary Clinton suffered as well but not as much as the Bern. Apparently, the old phrase applies, "Can't live with 'em, can't live without 'em. In any event, we are experiencing a first with an American President who hates the media and is making himself invisible to it.


The sustained attacks show "how worried he is about the repeated reports of chaos, incompetence, and potential wrongdoing inside his administration. His problem, though, is with the facts, not the media, and he’s only making his problem worse the more he runs away from it."

How does one say it? The country is going to hell in a handbasket, an expression I have heard since I was a kid, but have no idea what it means. But in the case of Donald Trump it could very well mean Armageddon.