Trump's "The Art of the Deal" shattered by Paul Ryan 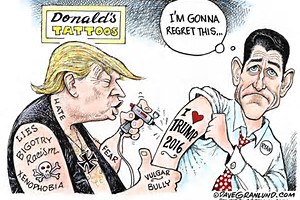 In November of 1987, Donald Trump's book, The Art of the Deal, was published and received well by the public. Today on Amazon it is 2,662 overall in books, #2 in biographies and memoirs, #13 in business and money and #22 in biographies and memoirs. That is good, considering the number of books published these days and the reviews are mostly positive. But in the book, he warns his readers "Never seen desperate." Well, he blew that theory during the recent blowout of Ryan’s American Health Care Act proposal. It went down in flames in spite of Donald John's disparaging begging.

The Progressive reports that although Trump pledged not to cut Medicare, Ryan's bill cut it $880 billion from the program, and the Freedom Caucus members wanted to cut much more. Ryan's bill which favors the wealthy and large corporations would...


"...devastate care for the most vulnerable ACA beneficiaries like the poor, disabled, and elderly. The Ryan plan would produce more deaths by swelling the ranks of the uninsured whose untreated conditions prove fatal."

From as far back as his tax-cutting proposals, to his American Health Care Act, Paul Ryan has been one of the most callous politicians toward the poor and needy of anyone I can remember. I can see why the man gets reelected by looking at the demographics of his 1st District in Wisconsin. Median income over $50,000; 91.1% white; 4.7% black; 5% Hispanic; and 57.7% white collar. Although his last election was close, and the next, well, we'll just see. Here's a stark statistic from the health care industry itself, published in the American Journal of Public Health...


"The Republican plan to replace the ACA would leave 52 million people uninsured in 2026. We know that will lead to many deaths—at least 41,969 and perhaps many times that number."

That isn't just callous. That is cold-blooded greed by Republicans to line the pockets of their constituents. And although the Freedom Caucus had a big hand in defeating the AHCA, Bernie Sanders says "Democrats should take credit for killing a really, really bad piece of legislation." Commenting further "Poll after poll showed that's exactly what the American people did not want." On the other hand, Donald Trump said...


"The best thing we can do, politically speaking, is let Obamacare explode. It is exploding right now," Trump said, adding that the 'losers' in the health care battle were Democratic Rep. Nancy Pelosi and Sen. Chuck Schumer."

And Trump continues to blame the Democrats for the GOP bill's failure, which, of course, is fully agreeable to the Bern. Trump, who refused to blame Ryan for the failure of the American Health Care Act The Guardian said this...


"Speaking afterward in the Oval Office, Trump blamed Democrats for the failure of a bill to repeal the signature achievement of Barack Obama. 'If [Democrats] got together with us, and got us a real healthcare bill, I’d be totally OK with that. The losers are Nancy Pelosi and Chuck Schumer, because they own Obamacare. They 100% own it,” he said.'"

And then, after the melee was over, Paul Ryan proceeded to blame everything on the fact that the Republicans are now the governing Party, and that "...comes with growing pains and, well, we’re feeling those growing pains today. I will not sugarcoat this: this is a disappointing day for us.” What Ryan isn't saying is what is wrong with the entire U.S. government right at this moment, is the fact that Republicans are the governing Party. It was also what was wrong with the U.S. government in Geo. W. Bush's tenure from 2001 to 2009. A disaster that almost brought the country down.

So apparently Obamacare is okay for the time being but isn't it interesting just how volatile this piece of legislation is and the effect it has on a certain percentage of the public. Just a week after the 2016 election, the Kaiser family Poll came up with these findings...


"One-fourth, or 26 percent, of Americans favor a full repeal of the health care law, while 17 percent say scale it back, according to the Kaiser poll. On the other hand, 30 percent favor expanding the law and another 19 percent want lawmakers to move forward with the law as it is."

The Kaiser report also found that there was a decline in the percentage of Republicans who want the Act repealed, something that must have had an effect on Paul Ryan's withdrawal of his bill. And here's another insight from Vox into how some Republicans really view the Affordable Care Act...


"Republican leaders and conservative intellectuals, for the most part, didn’t really believe nonsense about death panels or that Obama was personally responsible for high-deductible insurance plans. What they fundamentally did not like is that the basic framework of the law is to redistribute money by taxing high-income families and giving insurance subsidies to needy ones. The details matter enormously to everyday people, but the broad principle is enough to make conservatives reject it."

Wasn't aware there were that many intellectuals in the GOP ranks, but this is a real crowd stopper. Anything republican always comes down to just two factors: 1) How it affects the wealthy; 2) How it affects large corporate business. There is no in between for the average American and until average Americans understand this, voting accordingly, this country will continue to be mired in mediocrity.
at March 28, 2017