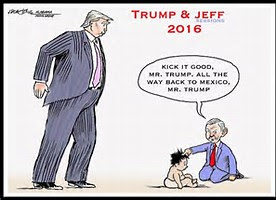 How many times has Donald Trump said, "[I'm] the least racist person that you’ve ever encountered?" However, history tells us that is not the case, an example of which is during Trumps' presidential campaign when he...


"...repeatedly made explicitly racist and otherwise bigoted remarks — from calling Mexican immigrants criminals and rapists to proposing a ban on all Muslims entering the US to suggesting that a judge should recuse himself from a case solely because of the judge’s Mexican heritage."

Vox tracks it back to the 1970s when Donald John was sued by the feds for racial discrimination because he would not rent apartments in one of his developments to African-Americans. It goes even further...


"It would be one thing if Trump simply misspoke one or two times. But when you take all of Trump’s actions and comments together, a clear pattern emerges — one that suggests that bigotry is not just political opportunism on Trump’s part but a real element of Trump’s personality, character, and career."

This white supremacist attitude has stayed with the man for all of his career, ushering in a spate of appointments in his administration that are racists and white nationalists. Like Steve Bannon, White House chief strategist and Jeff Sessions, the new attorney general. After the 1973 incident, it was in the 1980s when a black teenager accused the Trump Castle Casino of forcing him and other black employees off the floor when Donald John and Ivana visited. It was 1991 in a book written by a former employee quoting Trump on the handling of his money...


"Black guys counting my money! I hate it. The only kind of people I want counting my money are short guys that wear yarmulkes every day. … I think that the guy is lazy. And it’s probably not his fault, because laziness is a trait in blacks. It really is, I believe that. It’s not anything they can control."

Here's a real loser, The Trump Plaza Hotel and Casino in 1992, paid a $200,000 fine for moving black and women dealers off a particular table to accommodate a gambler's prejudices. There's much more and you can see it here at Vox.

Jeff Sessions was the US attorney in Mobile, Alabama, in the 1980s, talking about a case with colleagues about a young black man who had been kidnapped and brutally murdered by two members of the Ku Klux Klan. His throat had been cut and they hung his body from a tree. This was Sessions reaction...


"As Sessions learned that some members of the Klan had smoked marijuana on the evening of the slaying, he said aloud that he thought the KKK was: 'OK until I found out they smoked pot.'"

That should say it all but there's more. David Duke, former leader of the Ku Klux Klan, is a supporter of Sessions, as well as Trump. Sessions became infamous in Alabama for calling a black attorney, "boy," at the same time prosecuting three of Martin Luther King Jr.'s rights organizers for bogus voter fraud. It was done to, "...discourage voting rights for poor and elderly people in several "black belt" Alabama counties." After Sessions testimony Tuesday, the New York Times in an editorial...


"[Sessions'] defense against charges of racism that caused the Senate to reject him for a federal judgeship in 1986 was largely to say it hurt his feelings to be called a racist, but his two decades in the Senate provide little hope that he has changed."

Sessions calls the Voting Rights Act "intrusive," and is a strong supporter of voter ID laws that disenfranchise blacks, Hispanics and the poor. He has voted against every comprehensive immigration reform bill, and back in 2016 called Islam a "toxic ideology." A firm opponent of Roe v. Wade, Jeff Sessions also opposed the repeal of Don't Ask, Don't Tell and hate crimes protections for LGBTQ people and he voted to ban same-sex marriage. You can read additional critique on this man who is now the attorney general for the United States.

It was the 1964 Civil Rights Act that outlawed discrimination based on race, color, religion, sex, or national origin. When Lyndon Johnson sighed this Act into law, he had no idea that the U.S. would still be this racist in 2017, fifty-four years later. It's almost as if the paper he signed was meaningless. To Donald Trump and Jeff Sessions, it was.
at March 04, 2017