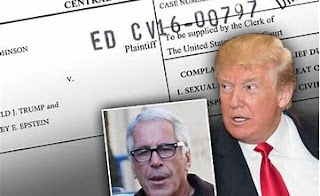 It's not just sex trafficking charges that Donald Trump's buddy, Jeffy, has to worry about. Now a 1980s fraud case is resurfacing with a claim by his old boss, Steven Hoffenberg that "Epstein was his accomplice in a Ponzi scheme Hoffenberg ran through his Towersinvestors.com." Jeffrey Epstein was arrested last Saturday on child sex-trafficking charges, and in a recent interview...


"Hoffenberg said Epstein was 'totally in the mix' of the scheme that defrauded 200,000 investors of $460 million. “He was my colleague daily, seven days a week."

Steven Hoffenberg is the chairman of Towersinvestors.com, a financial services company, and in 1995 Hoffenberg pleaded guilty to bilking investors out of $475 million...


"Tower investors also claimed in an August lawsuit that Epstein 'knowingly and intentionally utilized funds he fraudulently diverted and obtained from this massive Ponzi scheme for his own personal use to support a lavish lifestyle.'”

And here's a scenario by Salon...


"He owned a palatial home in Palm Beach and a luxurious residence in Manhattan. He owned a commercial airliner converted into a luxurious private plane. He gave parties attended by young women seeking careers in the modeling business. He was connected to numerous wealthy, powerful men who shared his taste in women and money. He bragged to others about his sexual conquests with women. He paid women for sex. He was charged in lawsuits with numerous sexual assaults on women."

Think they are talking about Jeffrey Epstein? Wrong. The subject is Donald Trump. The question here is why all the hurrah over Jeffy when the guy who sits in the White House, supposedly running this country, is guilty of the same escapades? We also are reminded of the Access Hollywood Billy Bush tape...

A stark reminder that Donald Trump is as big a piece of shit as Jeffrey Epstein, and he clearly condoned his friend's lifestyle. In the past, they were close buddies. And if there was any doubt in your mind, a former biographer, renowned for his work, makes it clear how close they were...


"President Donald Trump clearly lied to America in his attempts to distance himself from convicted sex offender Jeffrey Epstein. When the president stands on the White House lawn and said he barely knew Jeffrey Epstein, that’s just not supported by the fact pattern. They knew each other well from 1987 until at least 2002. Epstein was either a member of Mar-a-Lago in name or substance, but he was there all the time — and the president wanted him to be there."

Those were the words of Tim O’Brien, the author of the 2005 book "TrumpNation: The Art of Being the Donald," who was interviewed by Nicolle Wallace on “Deadline: White House.” Wallace made some comments about Trump calling Epstein a "terrific" guy, then deferred to O'Brien...


“When the president stands on the White House lawn and said he barely knew Jeffrey Epstein, that’s just not supported by the fact pattern. They knew each other well from 1987 until at least 2002,” O’Brien replied. “Epstein was either a member of Mar-a-Lago in name or substance, but he was there all the time — and the president wanted him to be there."

There's more you can read on Raw Story.

And finally, in an observation by Bob Hennelly of Salon, he observed Jeffrey Epstein as a man in court who sat with a "condescending disregard," for what was going on around him...


"I was sitting just a few yards away from Jeffrey Epstein as he sat with his defense counsel in Federal Court on July 8. His demeanor was more like an American Express Black Card member frustrated by a flight cancellation than a man facing sex trafficking charges that could put him away for 45 years."