Trump polls high but Americans Not sold on Trump or Democrat 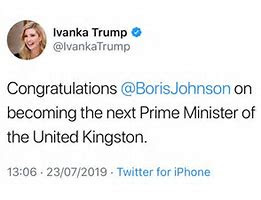 Joe Scarborough of MSNBC would like to know why Donald Trump Jr. had not been questioned as part of the special counsel probe, a question, perhaps, that could arise in Robert Mueller's testimony tomorrow. Scarborough said...


“There are only three questions that most Americans want the answer to. Was there obstruction, was there collusion and would Donald Trump have been indicted had he not been the president of the United States?"

This, in addition to the mystery over why Mueller didn't subpoena Junior...


"Why was Donald Trump Jr. the only American attendee of the infamous Trump Tower meeting in June 2016 not questioned by investigators?"


“There’s a recurring theme here about all of these investigations going on and everybody pulling back before giving Americans the answers that they need.”

I hesitate to even say it but, is it possible, deep down, Robert Mueller was afraid of the wrath of Donald Trump's legal team and that may still be the case?

Ivanka Trump is following in daddy's footsteps in keeping with stupid statements and an ignorance of the English language. She recently had to delete a tweet about Boris Johnson after repeated ridiculing of its misspelling. Boris Johnson was being named the next Prime Minister of the "United Kingston". The toofar site also came up with some T-rump goodies...


The POTUS is renowned for his Twitter gaffes, "Cheif Hostage Negotiator", "Hamberder", "Unpresidented", "Smocking" and the infamous "Covfefe" tweets among the more famous examples.


"Ivanka Trump violated the Hatch Act, which prohibits government employees from engaging in political activity, when she tweeted about her dad’s campaign in a Father’s Day post, a watchdog group says.


"The watchdog group argued that Ivanka’s Twitter account, which has over 6.5 million followers, has been used continuously for official government purposes, despite saying it is a “Personal Pg.” and that “views are [her] own” in the bio, which also includes her “Advisor to POTUS” job title. Thus, Ivanka's partisan Twitter activity can easily be read as that of a government employee, albeit an unpaid one, using her official position to promote political campaign issues."

They may be illiterate but all of this Trump clan knows how to use the U.S. government to further their own interests.

Trump polls high but Americans Not sold on Trump or Democrats

T-rump's latest tirade against the four congresswomen of color apparently juiced up his popularity rating, which clearly indicates to me a following of racists. If it did come from a "mainstream opinion poll," it would further signify a racist tendency now in the general population. Or is it that the four are all of the female sex and the bubbas out there can't stand the competition? All of a sudden their masculinity is threatened and they feel they must put them in their place.

The Marist Institute for Public Opinion at Marist College pollster says Independents would not reelect Donald Trump but at the same time are also unhappy with the course Democrats have taken. Even though Trump did his best ever in this poll, his approval rating is still just 44%. On the other side...


"52% of registered voters approve of his handling of the economy and two-thirds — 65% — of Americans think the economy is working well for them, including 62% of independents."

This would indicate to me that although Republicans got lucky on the economy, at the expense of the middle class, the voting public really doesn't want Donald Trump in the White House.
at July 23, 2019