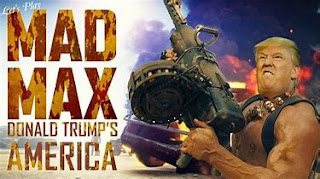 If it weren't for the fact that Donald Trump mentioned in his July 4th speech that the Continental Army took over the airports (in 1775, or 1812 what airports?), something which gave the whole world a laugh, the fact that he pretty much stuck to his script, plus the fact that apparently pictures reveal he had a relatively decent crowd, even in the rain, otherwise the whole ceremony was a disaster. Here's the statement on 1775...


“The Continental Army suffered a bitter winter of Valley Forge,” he continued, “found glory across the waters of the Delaware and seized victory from Cornwallis of Yorktown. Our army manned the [unclear]. It rammed the ramparts. It took over the airports. It did everything it had to do. And at Fort McHenry, under the rockets’ red glare, it had nothing but victory. And when dawn came, their star-spangled banner waved defiant.”

But the fact that he has always craved power, even from his first childhood, which has carried over into this childhood, where he dreams of being a strong-arm dictator like his idol, Kim Jong un. With tanks, parades, flyovers, all the things that despots do. It's all way out of line since the U.S. is and has been in a mode that does not encourage conflict, rather peace. But this all fits with T-rump's latest crusades in isolationism.


“It was a speech that had all the excitement of an excerpt from one of Bill O’Reilly’s YA history books,” Jong-Fast wrote.

Jong-Fast went on to criticize Trump's lack of any oratorical skills, which all tyrants must have, something the Oval Office lunatic replaces with bullshit, riddled with endless lies. Salon ended its piece with...


Unfortunately for Trump, his old nemesis John McCain had the last laugh. Again.

The Blue Angels tribute at McCain’s funeral in Annapolis was in every way more patriotic and inspiring.

So much for Donald Trump and his July 4th debacle.