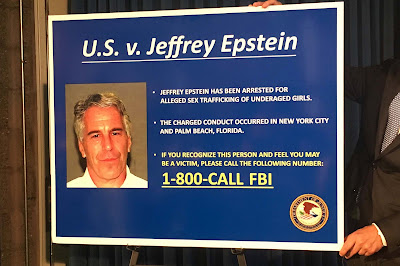 Donald Trump should examine closely the saying by 17th-Century English theologian Thomas Fuller, "it is always darkest before the dawn," which Washington Monthly's Martin Longman says may have been meant to be optimistic, but in Donald Trump's case is more of a warning. He speaks of the "smut business" of Jeffrey Epstein involving human trafficking of underage girls, evolving almost on the front lawn of the White House. So far, T-rump has been unable to shake it.

In a CNN opinion piece by Elie Honig, who used to work for the independent Southern District of New York, Jeffrey Epstein's "just being charged by the SDNY is, in itself, a defendant's nightmare." Honig cites the track record...

Epstein's victims will have a chance to testify against him, many of whom are now adults and have already come forward. Will he go to trial, plead guilty without cooperation, or cooperate? These are his three choices, and it also has to be considered that others will be implicated with him along the way. It is obvious the noose is tightening around Jeffrey Epstein's neck. Anyone aware of any spare rope in the White House?


"There was a time when Trump could be counted among Epstein’s rich, well-connected friends. And, according to a report in the New York Times on Tuesday, the relationship may have been a good deal closer than the president has let on."

Houraney claims Trump deceived him into thinking this would be a party of VIPs. In warnings about Epstein’s behavior, banning him from Houraney's events, the latter said, “Trump didn’t care about that.”


Jeffrey Epstein wealth just a fantasy? A new report says his reputation of being a billionaire appears to be a myth. "The story also revealed that Epstein has been a client of Deutsche Bank, the embattled institution facing waves of controversy in recent months and years." Along with his exploits with underage girls, Epstein has also become prominent because he has been identified with former president Bill Clinton and the current Oval Office lunatic, Donald Trump.

Could Jeffrey Epstein walk again on double jeopardy? Untangling a lot of legal jargon, it would seem that double jeopardy could impact New York's case against Epstein but prosecutors will argue...


"that the 2007 SD-Florida non-pros does not bar a 2019 SDNY indictment arising out of the same conduct and charging the same offenses."

Andrew McCarthy of the conservative National Review cites the recent Supreme Court ruling on the “'dual sovereignty'” doctrine — hurts, rather than helps, the SDNY’s position." Not good. Apparently the key is that SDNY only has new evidence not a "new offense," which is necessary to overcome the double jeopardy. "There has to be proof of a discrete criminal transaction that amounts to a new offense." I thought Epstein's shenanigans were ongoing. We'll see,

Read more: "The state of New York protected Jeffrey Epstein — not his victims"

Why did Jeffrey Epstein wire $350,000 to two co-conspirators? Federal prosecutors allege "he wired hundreds of thousands of dollars to two potential witnesses, according to court documents." The $350,000 was wired...


"between November and December in 2018, after The Miami Herald published its extensive investigation about his previous plea deal."

"The two individuals who were alleged to have received the money were possible co-conspirators prosecutors said, according to NBC News."

These are charges of witness tampering with two unnamed individuals that may have been co-conspirators, according to prosecutors, who are requesting no bail for Epstein. Business Insider reports...


"This course of action, and in particular its timing, suggests the defendant was attempting to further influence co-conspirators who might provide information against him in light of the recently re-emerging allegations," prosecutors said in court filings."

People Who Abandon Their Animals Should Suffer the Same

In some states like California, it is basically illegal to abandon your animal: Penal Code's Section 597 states it's a misdemeanor...