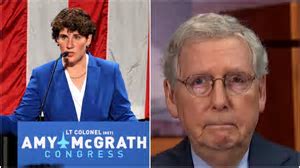 July 12, 2019: ‘Everything that’s wrong with Washington started with him,’ a headline from Raw Story refers to Mitch McConnell. But now he has a credible candidate challenging him in 2020. It is Amy McGrath, "a former Marine Lieutenant Colonel fighter pilot with a Masters from Johns Hopkins. A BS in political science from the U.S. Naval Academy. She’s 44. A Democrat. The mother of three and married to a life-long Republican."

"McConnell is not liked in Kentucky. His average approval rating is just 25%, and his unfavorable is 46.7%, according to Real Clear Politics."


"I’m running to replace Mitch McConnell in the U.S. Senate. Everything that’s wrong with Washington had to start somewhere—it started with him. With your help, we can defeat Mitch and defend democracy. Join us: (link: http://www.AmyMcGrath.com) AmyMcGrath.com"

McGrath lost a close election for Congress in 2018, by less than 10,000 votes, 51% to 47.8%. But "McConnell is not liked in Kentucky. His average approval rating is just 25%, and his unfavorable is 46.7%, according to Real Clear Politics." Amy McGrath wrote McConnell a letter at age 13, which he never answered, provoking the comment, “I’ve often wondered how many other people did Mitch McConnell never take the time to write back, or even think about.”

In a Politico piece, McConnell is called  “Cocaine Mitch,” “Nuclear Mitch” or the steward of the “legislative graveyard,” admitting,  he’s the “Grim Reaper” anyway, so he’s loving every minute of it. Mitch the misrule mechanic, thinks all this is funny, stonewalling anything that comes from Democrats, no matter how good or important the legislation is. The racist in this lowlife proclaimed, "my number one priority is making sure president Obama’s a one-term president." He didn't.

If Kentucky voters dislike Mitch McConnell as the above figures would indicate, an approval of only 25%, unfavorable 46.7%, and Kentucky voters continue to reelect the man, then I would place these poor souls in the same category as the clueless, double-digit Donald Trump supporters. Amy McGrath raised $2.5 million in the first 24 hours of her campaign eclipsing presidential contenders Elizabeth Warren and Kamala Harris. Want to be beat Mitch McConnell? Make a contribution to Amy McGrath here.
at July 12, 2019