WEEKEND NEWS DIGEST: The Republican Party darkened Colin Kapernick's skin in a political ad, then lied about it

The biggest judicial problem we have in addition to a one-sided Supreme Court are loaded courts across the country with conservatives orchestrated by the bottom feeder, Senate head Mitch McConnell. Politico reports...


"Every senator running for president has voted far less often for Trump’s judges this year compared with the previous Congress."

This has been a Republican focus that supports their legislation at local levels. It has become dangerously lopsided for the GOP.


"that high-level party officials have thanked him behind closed doors for his stance on impeachment proceedings against Trump."

Love affair between the alt-right and Donald Trump is on the rocks in areported by Raw Story, because the president’s policies and actions are not playing out in the way that the right wing extremists had hoped. Owens reports 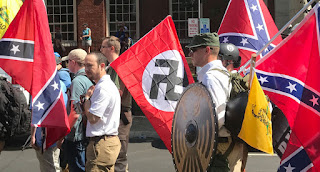 
"commenters on forums hosting alt-right rabble-rousing appear to have given up on Trump."

The alt-right feels its heyday of power is weakening, combined with Trump's betrayal of their march for white supremacy, tied in with the feeling that he has failed to deliver on the sweeping immigration enforcement he promised during the campaign.” There are just over 11-million whites that have beliefs consistent with the alt-right’s worldview, according to a U. of Alabama researcher. The question is, do they vote?

Is the alt-right moving up or down?...

Will Obamacare survive the appeals court? If you are one of the 20 million insured by the Affordable Care Act (ACA), your coverage as you know it could end if the 5th U.S. Circuit Court of Appeals makes its ruling. In question is the mandatory provision of the act that is accompanied by the preexisting clause. It is the fact that Obamacare is compulsory that is considered unconstitutional, but why throw out the rest of the law, especially the preexisting part?

The Republican Party darkened Colin Kapernick's skin in a political ad, then lied about it. It was Yahoo News’ White House correspondent, Hunter Walker...

"who caught the National Republican Congressional Committee pushing out a disparaging meme of Kaepernick."


“House Republicans are running on racism, plain and simple. It’s disgusting, it’s offensive and it should be fireable, but there’s no accountability in the Republican Party,” a Democratic operative said.

It was when given the opportunity to clean up the public relations disaster that the GOP lied about it. The "original photo compared to the meme, clearly shows otherwise." The Republican Party is beyond pathetic!