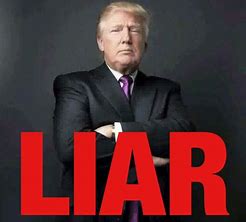 July 11, 2019: Since lying seems to be what Donald Trump does, and he is certainly known for it around the world, how many lies will it take to win the 2020 election? And can the Democrats summon the strategy to beat this megalomaniac? As an aside, would you agree that Trump makes Karl Rove look like a Sunday school teacher when it comes to lying? He is already lying that "he has better support among key demographics — women, Hispanics, young voters — than he actually does."

When I Google "Trump's latest lies," I get 55,400.000 hits. I also get a treasure trove of deception, dishonesty and disinformation, most all associated with the Oval Office lunatic, Donald Trump. On one site I found a report from the Washington Post that said Trump had made 10,000 “false or misleading claims” since entering the White House. 'You were indicted for one,' Nicolle Wallace told Trump who had just said, “I don’t do cover-ups,” re. Nancy Pelosi's charge.

And the most interesting was a site by a former card magician exclaiming, "How Trump Gets Away with Lying, as Explained by a Magician." Ben Chapman continues, asking these questions, “How does he just keep lying?” “He can’t possibly get away with this again.” “Why do people still trust him?” Chapman has his own opinion of Donald Trump...

"Our current Administration has shown an unprecedented disregard for the truth, and many Americans are flabbergasted at how few people are disturbed by this disregard. As a former card magician — and therefore someone with a bit of experience deceiving audiences — I have developed some strategies to catch other people in their lies."

His strategies are very interesting, starting with, "1. Dress for the Occasion."
With five in all, you will gradually begin to visualize the subject of his piece, then see the actual picture of Donald Trump. I wouldn't bestow T-rump with the credibility of a magician, but he has certainly developed some of these tactics, turning them into the implements of his warped mind. Ben Chapman's site is well worth your time, providing unique insight into the Donald Trump psyche.

But, back to the original question, "Can Democrats beat Trump lies in 2020?" Here's where it stands right now...


"The Trump campaign has been spending about $1 million weekly on Facebook and Google ads. In comparison, the Biden campaign spent about $75,000 last week. The Trump team knows that the online world is where their campaign thrives and they also know that they can expect little to no regulation from Facebook even when their ads are a direct violation of Facebook policy."

Distortion and deceit without regulation, a strategy that hearkens back to Karl Rove's handling of the George W. Bush campaign. And yes, the Democrats employ their own version of deception but nowhere near as blatant as Republicans, especially Donald Trump, the world's most egregious liar. The best example recently is a fake Joe Biden website run secretly by an operative working for the Trump campaign. Not even sure Karl Rove would do that.