Donald Trump and his former administration persist, and it is alarming

70 million warped Americans and some double-digit congressional members still support Donald Trump. That's over 5% and, although not astronomical, any percentage over zero, considering the events of the last four years, and Trump's recent act of insurrection at the nation's Capitol, is completely unacceptable. These pour souls follow Trump for a number of reasons. Here are six...

4. Voting with their pocketbook

5. Hold your nose and vote Republican

6. But he and I are Christians! 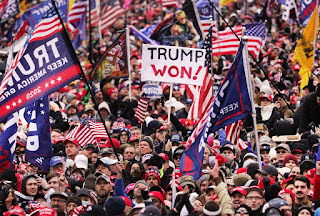 You can see definitions of all six on Salon and the article makes an interesting point, "Not all Trump supporters are alike." Well, you would think not when you consider the Capitol rioters compared to supposed evangelicals, like those above in number 6. I am not a Christian, but I know what a Christian is, and Donald Trump is not one. Read more...

Betsy Devoss. What can I say. You select an incompetent illiterate to run the U.S. Department of Education? Yes, you do, when you are also an illiterate incompetent, namely, Donald Trump. But, we're rid of her, or are we? Jeff Bryant in AlterNet confirms what we already know, she's gone but not forgotten.

DeVoss tried her best to push private schools over public education and this is what Bryant thinks has happened...

The public "should remain incensed over how her efforts to privatize public schools are being rolled out in state legislatures across the country."

That's right, the deviner of moving our learning to the closet of selectivity was proposing a system that is no better than public schools, according to a study released by The Washington Post. The AlterNet article claims, "This [private education] Is Not What People Want." With more...

What's telling about these bills is that proponents of school privatization clearly see the need to quickly ram through their proposals because popular opinion is not necessarily on their side.

Jeff Bryant has done a good job of covering this subject pointing out the positions of many states o    n the issue. Read more...