Coronavirus latest developments you should be aware of

Florida Governor Ron DeSantis blows off recent COVID-19 figures from Florida, and says the media criticizes him but not blue states. Here are some very accurate figures: Fla. #3 total virus cases; #4 total deaths. As of February14, "Florida's Department of Health has reportedly refused to share data about the number of COVID variants found in the state. Florida has two coastlines of beaches with each having its share of super spreaders.

But what is worrying everyone is spring break. Young people seem to go into complete denial when it comes to things like this annual tradition that brings together millions on Florida beaches where masks and distancing are repressed for fun. And then there is the Kentucky schmuck, Senator Rand Paul, a Republican, of course, who has had the virus, but is a doctor who should know he could get reinfected or become a carrier. He still refuses to wear a mask.

"The 346-page Government Accountability Office document, much longer than most, outlines broad Trump administration failures so alarming that the normally circumspect auditors pronounced themselves 'deeply troubled.'”

"Almost 90 percent — 27 of 31 — of the GAO’s recommendations from June, September and November “remained unimplemented” as of Jan. 15, less than a week before Trump left office."

Iowa is still in the forefront with the governor's decision to rescind all COVID-19 precautionary measures. "On Feb. 5, Gov. Kim Reynolds announced she was lifting nearly all of her restrictions on businesses, gatherings and masks." The Centers for Disease Control and Prevention Director Rochelle Walensky commented...

Although the U.S. has dropped below the 100,000 cases per day mark, there is still the threat of new new variants and Iowa has recently confirmed a total of 8 of the U.K. mutations. Research is limited so far but early results are showing the variants are definitely more transmissible, perhaps more contagious and dangerous.

But the most troubling thing I have come across since the start of the pandemic is this article from New Scientist explaining that two of the variants have combined their genomes "to form a heavily mutated hybrid version of the virus." A genome is an organism's complete set of genetic instructions, a full set of chromosomes. The “recombination” event was discovered in a virus sample in California, a good sign that the pandemic might be entering a new phase.

"Unlike regular mutation, where changes accumulate one at a time, which is how variants such as B.1.1.7 arose, recombination can bring together multiple mutations in one go. Most of the time, these don’t confer any advantage to the virus, but occasionally they do." 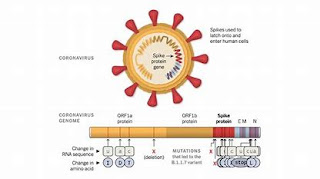 The most frightening consideration here is that this new mutation process seems to be able to do whatever it wants to do, regardless of our medical and scientific efforts. and in the process become more deadly. So what can we do? As Dr. Fauci has been saying from the beginning, wash your hands, wear a mask, now double, when in public, and practice social distancing. It is still his premise that, by employing these simple precautions, we could bring the pandemic to its knees.