PARODY: U.S. gun owners willingly give up their weapons

This week marks a change of format in Nasty Jack posts featuring parody to illustrate just how hilarious and absurd the political scene can be. Enjoy! 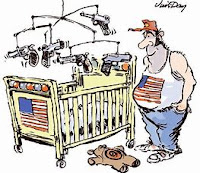 Clyde Gunsareme had his shiny GLOCK 17 GEN 3 9MM 4.49" BARREL 17-ROUNDS ready for U.S. Marshalls who were confiscating all private owner handgun weapons. It was still loaded after taking it off the coffee table where it had been displayed since he bought it so his 6 and 7-year-old kids could look at it and marvel. Clyde wanted his children to worship guns just like he did. One day the 7-year-old brother had picked up the Glock, aimed it at his sister, and pulled the trigger. Fortunately he was a lousy shot and the round just took out the family TV.
Clyde, and his gun nut friends, had known this confiscation violation of their 2nd Amendment rights was coming so they all got together and called the NRA's head gun nut, Wayne LaPierre. But, as one might expect, LaPierre was too busy with the gun manufacturers to spend time helping NRA membership. This pissed off the rank and file gun huggers so they quietly decided to break in to the group's main office and steal LaPierre's well used manual, "What is a Gun."