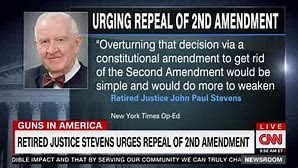 Twenty-two people were injured by gun violence in a shooting at a 24-hour art festival in Trenton, New Jersey, where two men are believed to be the shooters, with one of them killed by police. While there were no deaths, four people are in critical shape, one a teenager. It was an all-nighter that started at 3 PM featuring 1,500 pieces of art. There was an attempted carjacking near the festival but law enforcement hasn't been able to tie it in with the shooting. In other words, at this point there is minimum information available, but we do know it was another senseless shooting.

First, we need to know what the weapons were, how the assailants got them, and why they picked this particular event. Not that it will explain that with guns everywhere in the U.S., the fact of where the guns came from may no longer be relevant. In just 2018, there have been 26,570 incidents of gun violence, which have ended in 6,568 deaths, and with 12,359 more injuries. There have been 1,547 children killed or injured. And there have been 130 mass shootings like the one in Trenton. But the imbeciles that populate the U.S. Congress, because of the NRA, are scared to make a move.

Wayne LaPierre, the National Rifle Assn. head gun nut, has been spewing his 2nd Amendment crap for years, and apparently it has registered with congressional members, the general public, and most certainly with his gun nut membership. It is time to repeal the 2nd Amendment and start over. Gun permits should be radically limited and right to carry only for law enforcement or those with an absolute need. Former Supreme Court Justice John Paul Stevens said in March of this year in a NY Times op-ed piece, "Repeal the 2nd Amendment." It, of course, got nowhere.

Stevens says this nonsense of the people arming themselves against a tyrannical government is, "a relic of the 18th century." Basically, that puts the 2nd Amendment and everything that comes from LaPierre and his NRA in the same category. In a reaction to the demonstrations of schoolchildren after the Parkland, Fla. gun massacre, "They reveal the broad public support for legislation to minimize the risk of mass killings of schoolchildren and others in our society." This should include...


"legislation prohibiting civilian ownership of semiautomatic weapons, increasing the minimum age to buy a gun from 18 to 21 years old, and establishing more comprehensive background checks on all purchasers of firearms. But the demonstrators should seek more effective and more lasting reform. They should demand a repeal of the Second Amendment."


"In 1939 the Supreme Court unanimously held that Congress could prohibit the possession of a sawed-off shotgun because that weapon had no reasonable relation to the preservation or efficiency of a 'well regulated militia.'”

The militia thing is there but at least the Supreme Court had the common sense, and, apparently, the legal foundation to say a sawed-off shotgun wasn't included in the intent of the Founding Fathers to represent protection. In keeping with that Stevens is implying that assault rifles are not a necessary weapon for protection, thus, they should be outlawed. You may not know this but in the "long-settled understanding of the Second Amendment’s limited reach by ruling, in District of Columbia v. Heller, that there was an individual right to bear arms. Stevens was one of four dissenters.

Many of you may also know about Arizona's loose gun laws and an unusually high rate of gun violence. It is in the top 16 in the country. Here are the stats...
The reason I bring this up is an op-ed in the local Phoenix paper titled, "Control lacking in the Second Amendment." The writer was more concerned over the way the paper, conservative, had changed his title in the piece published earlier, which does not apply here. What is important is what Leon Gildin said at the end of his recent article. He exclaimed, "Control is what is lacking and the reason therefore is, with all due respect, the Second Amendment, as it was written, is not relevant to the issue of gun ownership or gun control in today's world."

Like former Supreme Court Justice John Paul Stevens said, the 2nd Amendment is a relic of the 18th century.

States with the most (and least) gun violence. See where your state stacks up.
at June 19, 2018