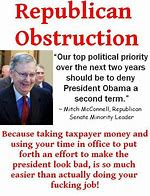 CNN's Byron Wolf calls it devilish, brilliant politics. I call it typical Mitch McConnell and this is what I had to say about him in a post June 7, 2015...


Don't tell me U.S. Senators deserve respect when they are the low life of Congress. If there was a barrel, the downside would have to be bottomless to accommodate Mitch McConnell.

The post was my reaction to McConnell's perpetual demeaning of Barack Obama, and his insistence that nothing he did would ever get anywhere in his Senate. These were his words when Obama was inaugurated...


“When I first came into office my number one priority is making sure president Obama’s a one-term president."

That, of course, didn't happen, when Obama handily won his second term. McConnell has a deep-seated hatred for Barack Obama, primarily based on the lowlife Senator's racism, a known fact for years. But, this scumbag now leads the U.S. Senate. He's blaming the August recess cancellation on obstructionism by Democrats, the kind of excuse a jerk like McConnell would use. The idea, of course, is to prevent Democratic Senators who are running in November, but my gut tells me there will be provisions made for Republicans.

There are 26 Democrat-held Senate seats and only seven Republican-held seats on the ballot in November. The latest poll shows a tightening of voting preference with the Democrats holding just a 4-point lead. In the House, however, where Republicans are defending more seats, they haven't announced plans to cancel the August recess. This all may be called strategy and, perhaps, the Dems would do the same if they were in control. The bottom line here is that the Republicans are using their power to win the November election. What they don't know is, it won't work.