Government's largest conglomeration of idiots ever led by Betsy Voss


In a comparison to Sarah Palin, I don't think Betsy DeVos knows just how stupid she is. Ill prepared in most every confrontation with Congress, the general consensus is that she is just, well, stupid. Now she told the Senate appropriations subcommittee on Tuesday that the Federal Commission on School Safety, which she chairs, "will not look at the role of guns in a recent spate of school shootings." OK, let's step back and look at that statement; Betsy DeVos says she refuses to explore the very component that has school children so scared they are afraid to go to school. 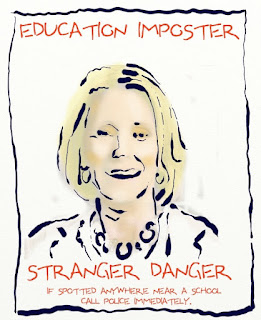 I might remind you here that it is Betsy DeVos who also wants to get rid of the public school system. That should have been the clue that this person is not fit to be head of education in this country. But wait, Republicans are in control of the government so keeping her around makes perfect sense. The day after this ludicrous performance before Congress by DeVos, "A school shooting survivor and several students urged a White House school safety commission on Wednesday to include guns in its discussions." Once again, it is the young people who display the brains.

Donald Trump wants to arm school employes, which, according to former Sandy Hook teacher, Abbey Clements, it “sends the message that adults can’t solve the problem of gun violence in America.” Well, the problem here a firm WE CAN'T, and that is due to the interference of the National Rifle Assn. blocking the passage of reasonable gun control legislation. Here's what Clements said about arming school employees...

“I would like to make something perfectly clear — had school employees been carrying guns at Sandy Hook, it wouldn’t have made us safer. It very well might’ve made things worse.”

To compound DeVoss' stupidity, this commission she heads up for school safety was "formed after the mass school shooting in Parkland, Fla." And yet Betsy DeVos exclaims the commission "Won’t Look At Role Of Guns In School Shootings," adding, "The secretary of education is not charged with focusing on firearms." Where the hell do we get these people?

‘You must understand how fast shootings happen’
at June 08, 2018