Should James Comey run for President? Read his book 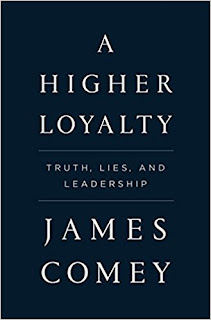 I had a hard time getting through the first part of James Comey's book, A Higher Loyalty-Truth, Lies, and Leadership. I thought he was wasting too much time on his past life and background until I realized the core of this man's meaning and purpose for wring his tome, to present the two sides of what a government can be. Sleazy, corrupt and unacceptable like the Donald Trump administration, or honest, loyal to the people and worthy of its leader like, say, Barack Obama. The latter may not have been effective enough for many, mostly because of a repressive Republican Congress, but he had principles James Comey admired and possessed himself. Primarily honesty and loyalty.

Comey's background is diversified legally, a U.S. Attorney in New York, U.S. Deputy Attorney General under GWB, and when Barack Obama appointed him Director of the FBI. Through these four positions, he says in his book that he has become extremely familiar with the workings of the U.S. government. He doesn't say this but under both Obama and Trump, a dysfunctional government, for the former, Republicans denying everything he tried and the latter, the man himself, Trump. James Comey doesn't really badmouth anyone but he does speak the truth.

Especially in the book's epilogue where he comments...


"this president [Donald Trump] is unethical and untethered to truth and institutional values. His leadership is transactional, ego driven, and about personal loyalty."

He goes on to commend those who have stayed with the administration, even with the adversity of this lunatic's constant tirades. Perhaps they have kept us out of a nuclear war, or at least calmed the nations of the world that believe the United States has lost its mind by electing a maniac for president. Donald Trump has said for years...


"I just feel that loyalty is a very, very important part of life, not only of business but of life."

To this Paul Waldman of The American Prospect commented on Afternet...


"The truth is that Trump demands loyalty from everyone but gives it to no one. As he prowls the darkened hallways of the White House at night, alone with his thoughts, his wife and young son 200 miles away, the staff having retired for the night, it wouldn't be surprising if Trump is becoming increasingly convinced that no one is loyal to him and there's no one he can trust."

Trump tried the loyalty ploy with James Comey and was rebuked just before he was fired as FBI Director. Most have seen Comey's move as laudable and in fact there is probably no person in the American government today that is more loyal to this country than James Comey. He is a Republican but even as a liberal Progressive, I would vote for the man. However, it is just possible that James Comey has had quite enough of the stinkin' dirty politics working for Donald Trump that he wants nothing to do with a Presidential election. Only time will tell.

Read more: Trump Demands Loyalty From Everyone, But Gives It to No One
at June 04, 2018