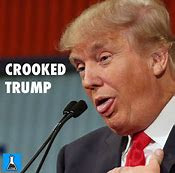 There are accusations that...


"there’s a good chance that the Trump Foundation is only the grimy tip of the iceberg, when it comes to self-dealing and other dubious activities at small family foundations."

That's a great opening to introduce an organization 100% owned and controlled by the President of the United States. Slate also says...


"In 2015, 109,550 private foundations filed tax returns with the IRS, and almost none of them will ever be investigated by their state’s attorney general."

"Is Trump-style self-dealing abnormal for the Gates Foundation or the Ford Foundation? Absolutely."

New York attorney general, Barbara Underwood, said, "Mr Trump had illegally instructed the foundation to provide support to his presidential campaign by using the foundation's name and funds it raised to promote the campaign." Her petition also claims, "that Mr Trump used charitable assets to pay off legal obligations, to promote his own businesses and to purchase personal items, including a painting of himself." It was found that the Trump organization used Foundation funds to buy a $5,000 ad for Trump International Hotels in the DC Preservation League charity event programs.

The New York attorney general, in its 41-page complaint, said "The Trump Foundation was a Trump Organization slush fund; it wasn’t a genuinely charitable endeavor." The "Trump Foundation handed over some $2.82 million directly to Trump campaign staff, for them to disburse as they saw fit; those donations were specifically targeted to states with upcoming primaries where Trump was running as a candidate." The NYAG says that's illegal; Charitable foundations are not allowed to engage in political activities, period." Sounds like the legal advice was either faulty or Trump just didn't care.

It would appear that "in Trump’s mind, the Trump Foundation was never really a charitable foundation, created for acts of selfless generosity. Instead, it was little more than a money-laundering machine: Donors with their own ulterior motives could give tax-deductible donations to the foundation, and then in turn the foundation would be used whenever Trump wanted to funnel money to a nonprofit." And in that scenario you have the makings of a crook.
at June 17, 2018