This is a continuation of my new series focusing on the lies and misstatements Donald Trump has made since entering office. 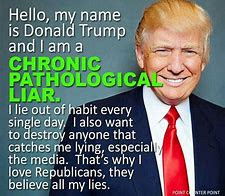 And jumping right into healthcare...

"...Repeal and replace Obamacare. But what -- we had it done, folks. It was done, and then, early in the morning, somebody turned the hand in the wrong direction. That cost our country a lot. That was a very, very terrible thing that happened that night. That was a very terrible thing. That cost our country $1 trillion in entitlement saving that nobody would have known."

"in fact: Sen. John McCain's vote against Trump's plan to repeal and replace Obamacare did not cost the country $1 trillion. As the Washington Post noted: "Trump's estimate is way off. The Senate bill to repeal and replace Obamacare that Trump is talking about would have reduced the deficit by a net $321 billion over 10 years, according to a joint analysis by the Congressional Budget Office and the Joint Committee on Taxation."


"The Failing @nytimes quotes 'a senior White House official,' who doesn't exist, as saying 'even if the meeting were reinstated, holding it on June 12 would be impossible, given the lack of time and the amount of planning needed.' WRONG AGAIN! Use real people, not phony sources."


"....At what point does this soon to be $20,000,000 Witch Hunt, composed of 13 Angry and Heavily Conflicted Democrats and two people who have worked for Obama for 8 years, STOP! They have found no Collussion with Russia, No Obstruction..."

"in fact: Nothing in this rapid-fire series of claims is verifiably true.


"But as I've been talking about this idea -- and I feel it's a great idea, but some people that are good people are opposed to it; they don't like the idea of teachers doing it. But I'm not talking about teachers. You know, CNN went on, they said, 'Donald Trump wants all teachers.' OK? Fake news, folks. Fake news. Fake news."

"in fact: A search of closed-captioning archives does not turn up evidence of anyone on CNN saying Trump wants to arm "all teachers." Regardless, Trump's claim that he is "not talking about teachers" is transparently absurd: in this very same speech, he elaborated at length on his proposal to arm teachers. While he made clear that he was talking only about a minority of teachers, that is still talking about teachers."

Folks, there are over 1,600 of these and some of the best are yet to come. For the first time in the history of the United States, there is someone in the White House that has based his entire presidency on dishonesty and misleading the American public. Stay tuned.
at June 13, 2018