Philadelphia Eagles will probably go to Disneyland instead...


The fact of the matter is that the Philadelphia Eagles didn't even do what they are accused of by Donald Trump. Not one Eagle Player kneeled for the National Anthem last season, but the Oval Office lunatic in his long-running feud with the National Football League canceled their visit to the White House in honor of their winning the Super Bowl. This bad blood with the NFL exists since the league "stonewalled his effort to buy the Buffalo Bills in 2014." This is what Trump said in canceling the event...


"The Eagles wanted to send a smaller delegation, but the 1,000 fans planning to attend the event deserve better." 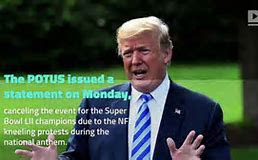 The word was that only four Eagles had agreed to appear with T-rump, a statement in itself of the disdain felt for this man around the country. Although the Eagles didn't. players who kneel in protest have been called "sons of bitches" and it was suggested they shouldn't be in the country. This is purely an act to impress his "Make America Great Again" followers. But let's be clear about how this slogan came about; Trump stole it from Ronald Reagan's 1980 presidential campaign, "Let's Make America Great Again." And now he claims it's his own.

Fox News is struggling in its support of T-rump's decision but can't seem to find any photos or videos to substantiate the Eagle players were kneeling. Didn't know Fox needed anything to corroborate their "facts," and isn't it interesting that the "news network's" main thrust is to find something to support Donald Trump, even when there is obviously nothing there. The Eagles will survive; as a matter of fact, they had decided not to go to the White House long before the "Anthem" rule was passed. This kind of aversion to Trump must be turned into Democrat/Progressive votes in November.

Read more: Trump's Battle with the NFL Has Reached Critical Mass
at June 06, 2018