Trump plus children have been charged in crooked Foundation dealings

Certainly not in this county and I would venture a guess, that looking around the world, Donald Trump is at the top of the list for being a corrupt president. Other contenders that come to mind are
Jean-Claude Duvalier of Haiti, Slobodan Milosevic of Serbia/Yugoslavia, and Ferdinand Marcos, President of the Philippines. They all screwed the subjects of their countries as well as the government they represented. The big difference is they did it blatantly, accountable to no one. Donald Trump makes a big secret out of his chicanery, always feigning innocence.

"foundation Trump) and its directors - Mr Trump and his three eldest children - of unlawfully co-ordinating with the Trump presidential campaign, repeated self-dealing transactions, and violating laws under which non-profit organisations must operate."

She added, "Mr Trump had illegally instructed the foundation to provide support to his presidential campaign by using the foundation's name and funds it raised to promote the campaign." Her petition also claims, "that Mr Trump used charitable assets to pay off legal obligations, to promote his own businesses and to purchase personal items, including a painting of himself." In other words the Oval Office lunatic used the Trump Foundation as a money machine to get him elected. The children involved in the lawsuit are Ivanka, Eric and Donald Jr.

Underwood alleges, "a pattern of persistent illegal conduct over more than a decade that includes extensive unlawful political coordination with the Trump presidential campaign," also saying,  "As our investigation reveals, the Trump Foundation was little more than a checkbook for payments from Mr. Trump or his business to nonprofits, regardless of their purpose or legality." The Foundation was supposed to be dissolved more than 18 months ago, making one wonder if it was kept open to funnel cash into Trump's campaign. Is this man so stupid to think he could get away with this? 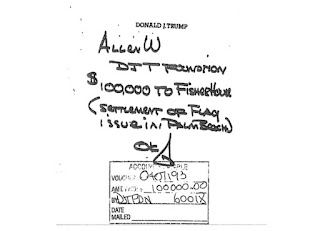 Sam Stein, Political Editor of The Daily Beast tweeted, "Donald Trump personally directed his Foundation funds to be used to settle a lawsuit related to Mar A Lago. Here is the receipt."

The Trump Foundation critcized the lawsuit as “politics at its very worst” and accusing the attorney general of holding its $1.7 million in remaining funds “hostage for political gain.”