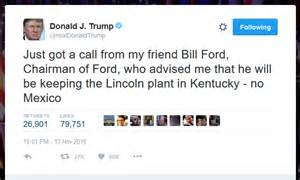 'Look at me world, I saved the Ford plant from going to Mexico,' was the war cry from a president-elect who continues to scam the public even after the election is over. Does it bring to mind the possibility that this narcissistic egomaniac is never satisfied with the status quo and must continue to heap adoration on himself? Will he ever be satisfied and get around to running this country? By the way, Ford never intended to move the plant to Mexico, confirmed by Ford.


"Just got a call from my friend Bill Ford, Chairman of Ford, who advised me that he will be keeping the Lincoln plant in Kentucky — no Mexico," he tweeted.

"I worked hard with Bill Ford to keep the Lincoln plant in Kentucky. I owed it to the great state of Kentucky for their confidence in me!" he tweeted.

Christin Baker of Ford confirmed that Bill Ford spoke with President-elect Trump on Thursday talking basically about Ford's commitment to America. Then we learn that the Ford/Mexico fiasco was really over the rumor they would move Lincoln MKC production to the company's plant in Cuautitlan, Mexico. So much for the American commitment. Yes, it's a two sided dragon: can't trust what our incoming president says and can't trust corporate "America."

This now becomes a Bernie Sanders issue where all the good jobs are moving out of the country to take advantage of cheap labor. Ford has already committed $1.6 billion to its Mexico operations and that figure could grow with future plans. Bottom of the barrel Republican Mitch McConnell, who also happens to be Senate head, voted at least three times for corporate tax breaks that send jobs overseas. Those workers that didn't vote for Bernie should take note.