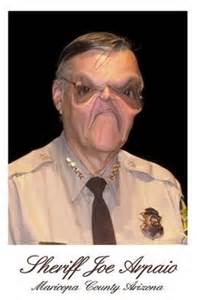 The Hispanic community of Arizona can rest easier after the decisive defeat of Sheriff Joe Arpaio in Tuesday's election, at least until January 20, 1917. I talked to one Latino as he finished grooming our yard, ready to ask him if he voted but he asked me first. I said, "Yes, did you?" His answer was a quick "Yes." I didn't ask him who he voted for but I'm betting as far as the Sheriff's race is concerned, it was probably Paul Penzone, Arpaio's opposition.

Don't know how my guy voted in the Presidential election either but Hispanics accounted for 11% of the total vote and favored Clinton by better than two to one. In 2008 Obama received 67% of the vote but the Latino turnout was only 9%. Once again this ethnic group did not step up to the plate. They also offered no help in the Arizona legislature where the stupid laws like the 2010 immigration bill that was eventually gutted.

I am more inclined to believe the white population of Arizona was finally fed up with Joe Arpaio, sick of the grandstanding to feed his ego, and at least $55 million in lawsuits against him and his department. And recently he was personally indicted on contempt of court charges he will have answer without his shield to back him up. Not sure what state's position will be on paying future legal bills. Knowing this state, anything is possible.

Hillary Clinton was supposed to ace the Hispanic vote but she barely held on to Obama's 2008 numbers. Either the Dems just aren't approaching the Latino community right, the latter just don't give a shit about their future, or it's all Hillary's fault. The future of the Democratic Party is significantly in question right now. Where are you Bernie?