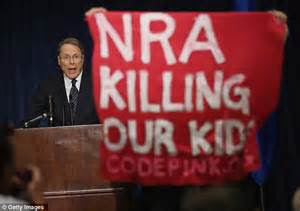 For years the National Rifle Assn., led by Wayne LaPierre, has railed against a government that suppresses its people and denies them their constitutional rights. Of course, the opposition has always been designed to protect their precious 2nd Amendment, a part of the Constitution that should have been done away with or at least modified significantly. Something that obviously could never happen under a Donald Trump presidency or Republican controlled Congress.

A recent post on this subject pointed out how the emphasis on state elections will probably increase in the next four years, while pointing out the high amount of gun violence the U.S. suffers annually from too many guns. At one point Trump said, “I support the ban on assault weapons and I also support a slightly longer waiting period to purchase a gun.” The Trace article also said that during the election, "...Trump adopted an incendiary message that matched the NRA’s own."

When the NRA heard Trump's repeated rhetoric that the 2nd Amendment was sacred, something that must be protected at all costs, the decision was made to pump $30- million into ads that supported Trump. It started with 5-million NRA members, then picked a rural population the NRA has been appealing to for years, all ramrodded by the huge ad campaign both for Donald Trump and against Hillary Clinton. It worked. Trump was elected but can the NRA really depend on his fickle nature?


The fact is that almost all of the Republican hierarchy shunned Trump in the early stages, as well as further into the campaign. Special interest groups ignored him; do the Koch brothers come to mind? Even the conservative press was caught off guard by his zany antics. Sociologist Scott Melzer, author of the 2012 book "Gun Crusaders: The NRA’s Culture War," told The Trace:


"The gun group and its candidate speak to 'this white rural conservative population that feels left behind by economic shifts and cultural shifts. These changes pose a threat to their identity.'”

Wayne Lapierre wasn't able to beat Barack Obama but he was successful defeating Hillary Clinton. I continue to wonder how long a gullible American public will buy the NRA's bullshit. Meanwhile, it accepts 12,000+ gun deaths a
year, over 3,000 of them children. Thank you America.
at November 17, 2016