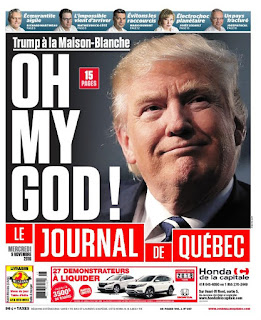 Trump's supporters may be in ecstasy right now but the rest of the world is in a state of disbelief over the outcome of the election. Here's a quote from the Pew Research poll taken last June:


"In seven of 15 countries outside of the U.S. polled by Pew Research Center, Trump’s ratings are in the single digits. Large majorities in 11 of the countries have little or no confidence in the prospective Republican presidential nominee ability to manage international affairs. That includes 92 percent of Swedes, 89 percent of Germans and 82 percent of Japanese."

He's going to have to come out more than just running to overcome that; a sprint probably won't even do it. NBC News describes it as follows: "Disbelief, horror and downright mockery." And we have to live with these people as a nation unless we plan to become isolationists. You must take a look at the above underlined NBC News article and marvel over the front pages of newspapers worldwide.

As when Trump started his campaign, we are the laughing stock of the world...again.
at November 12, 2016