Steve Bannon scarier than ever with his statement : "darkness is good." 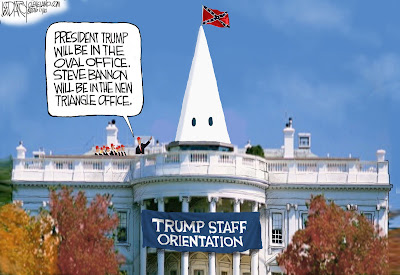 The term is in reference to keeping the liberals in the dark, but hits a familiar note when comparing Dick Cheney with darkness and in the same sentence, Satan. Bannon is "known for pushing nationalist policy positions, as well as conspiracy theories, and has been criticized as being racist, sexist and anti-Semitic." Speaking of Trump's potential ability to please the public, his comment is...

You'll notice the "we'll govern" in his rhetoric, indicating either Donald Trump has a twin or this presidency could be a doubleheader. If it is the latter, this is one of the points in Steve Bannon's agenda: Wants to replace Republican Party with "Trump's movement. I would have given anything to see the look on the faces of Mitch McConnell, Paul Ryan, even Mike Pence, when Bannon said that. He even mentions Andrew Jackson's populism to create a new political movement.

And here's a statement that is downright laughable, the fact that Bannon thinks Trump really gets it. Gets what? There is no substance to the President elect's issues and his thin skin keeps him attacking anyone who criticizes him indicating to me a vein of insecurity. What he gets is the fact that he hornswoggled enough of the public to be elected President, and now he is in the process of figuring out just how to convert this into the future of his businesses.