How many more guns does this country need? REALLY 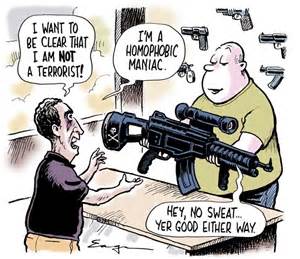 Apparently Donald Trump's gun lovers don't believe what he said about the 2nd Amendment, the National Rifle Assn. (NRA) and protecting their guns. They headed out in droves on Black Friday for the 10% to 50% discounts that were available on weapons like a $500 Sig Sauer and various assault rifles like an AR-15. Featured in many articles as the "go-to weapon for mass shooters," the average, reasonable individual wonders why any normal citizen needs one.

Because these people are not normal; they are obsessed with guns. And like some car enthusiasts who want the fastest vehicle they can drive, gun worshippers go for the gun with the biggest capacity. Like the Sig Sauer MCX .223 used in the LGBT nightclub massacre with a magazine of thirty. Omar Mateen killed 49 people with a gun that belongs only with the military and law enforcement, but is available to a majority of the U.S. population.

So, the fact that Hillary Clinton, an avowed gun control advocate, didn't win the election, had no effect on the Black Friday surge in gun buying, why are these enslaved individuals rushing out to buy more of what they probably already have at least one of at home? Because Wayne LaPierre, NRA Head, told them to and he did that because the gun manufacturers told him to. There are almost well over 300 million guns on the street, very near to one per household.

Since only one-third of U.S. households own a weapon, approximately 101 million, that's over 3 guns per household. Here are some obscene gun statistics to close:


The problem is, since we have a cowardly Congress, a newly elected President who favors gun rights, the future looks dismal.