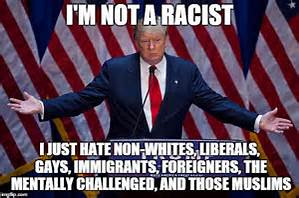 The Southern Poverty Law Center (SPLC) reports that over "300 incidents of harassment or intimidation have been reported following Donald Trump's election Tuesday night." And, according to NBC, the reports continue to come in mostly from K-12 schools and on university campuses. In many cases the Trump campaign was featured in the incident. It's bad enough that Trump's uneducated redneck adults do this but K-12 through college? Pathetic!

Messages like, "Trump Nation, Whites Only." Another, a white male threatens to set a female Muslim on fire. Again a message, along with a swastika, "Heil Trump" and "F-- Church" were spray painted on the walls of an Episcopal church. Back to the segregated South, "Colored" and "Whites Only" signs were placed above drinking fountains at First Coast High School in Jacksonville, Florida. "Make America White Again" message shortly after Trump victory.

The Huff Post reports on 13 incidents during the election when Donald Trump was an out-and-out racist. Among them:

There are more you can read on the Huff Post and I feel certain that over the years and during the election there were more. The American public has to come to grips with the fact that they have elected a man to the presidency of the most powerful county in the world that is a confirmed lowlife. And, he's proud of it. Bernie Sanders says he will hold Trump accountable as I am sure the millions of Progressives will across the country.