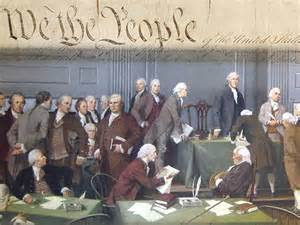 Why wouldn't they? They control the White House, both houses of Congress, and the Governor's offices and legislatures in many of the states. Perfect opportunity to turn this country so far right the average citizen will be on the streets begging. But wait, there's some actual substance to their plans. Jeb Bush--you remember him--wants to pass term limits and a balanced budget amendment. So far, so good.

A liberal, Harvard professor Lawrence Lessig, got in the act saying now's a great time to undo the Citizens United ruling. Some other liberals, mostly gun control advocates like me, would like to see the 2nd Amendment re-interpreted to fit the 21st century, putting Wayne LaPierre and his NRA gun nuts in their place. There hasn't been a Constitutional Convention since the original one that gave us the Constitution we have. But the environment has never been so right for one party, and the rules for calling a convention are in the Constitution.

Two-thirds of the states have to petition Congress for the meeting, required by Article V of the Constitution. Beyond this stipulation, instructions are vague, which could make it near impossible to come to an agreement. What bothers me most is that the American Legislative Exchange Council (ALEC) endorses the move and I am against anything they are in favor of. ALEC has only one purpose in mind, the promotion of corporations and industry. The consumer be damned.

Some lawmakers and constitutional experts aren't sure about dickering with the Constitution, especially in the environment of a convention. With the loose guidelines for conducting this sort of thing, we could end up with a disaster. But don't we sorta have that anyway now?
at November 27, 2016