The 3 Musketeers, Mike Pence, Moscow Mitch McConnell and including T-rump himself, trying to shift the blame from the Oval Office lunatic for the COVID-19 CRISIS to the CDC and China and the Democrats impeachment action...

It has been so clear to everyone that Donald Trump's early denials, and generally slow response to the coronavirus epidemic that eventually turned into a pandemic, is an established fact. This includes defective tests, not maintaining the proper supplies to fight the virus, and not getting testing started. He failed in all three, even more, and the United States now accounts for highest case and death figures in the world. At one time he called it a Democratic hoax.

A month ago when Mike Pence promised "risk of COVID-19 remains low"...

The latest figures show 211,408 cases in the U.S., 4,718 deaths, and 8,805 have recovered. The breakdown in the above link also shows results from each state and other factors in the crisis. It is a fact that the media has been covering this since the beginning and the blame according to all I have read--except, of course, some Fox News misinformation--is there is no doubt the person responsible was and is Donald Trump. 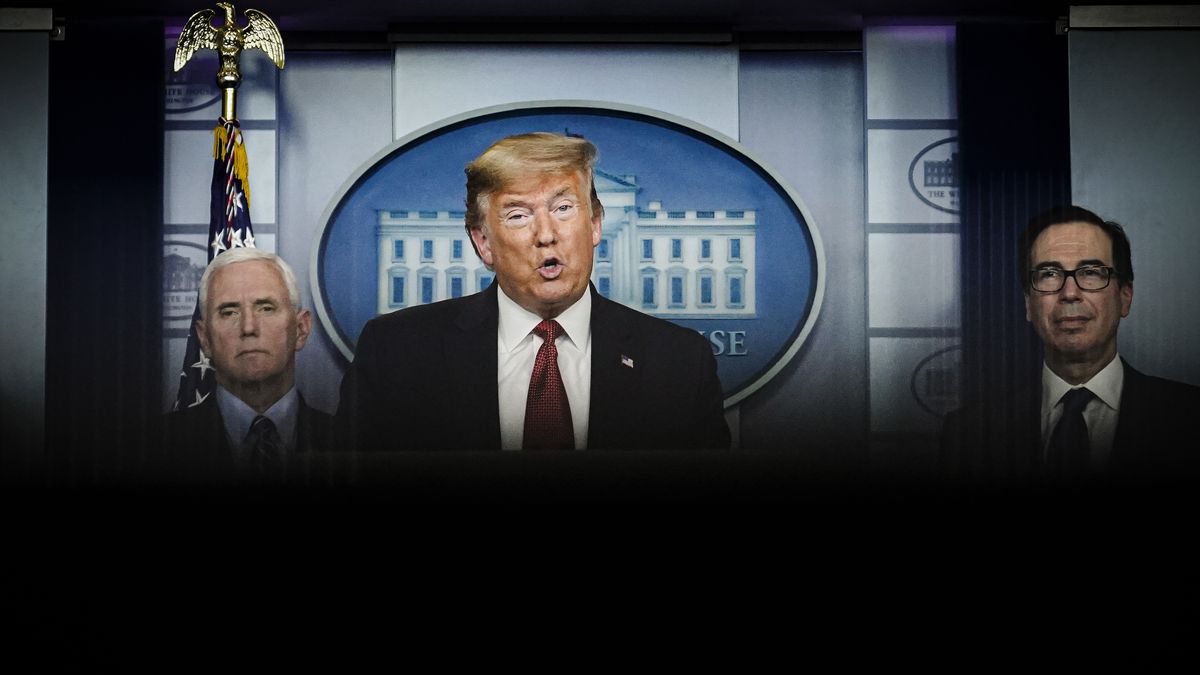 Remember the early stages when the Oval Office lunatic was more concerned about the economy than the virus and just last week, indicated he wanted to end social distancing to 'save the economy...


“America will again, and soon, be open for business,” President Donald Trump said on Monday. “Very soon. A lot sooner than three or four months that somebody was suggesting. A lot sooner. We cannot let the cure be worse than the problem itself.”

Ah, we have a new term, "We cannot let the cure be worse than the problem itself.” There's more...


"The cure, in this case, is social distancing, and the mass economic stoppage it forces. The problem is Covid-19, and the millions of deaths it could cause. On Tuesday, Trump accelerated his timeline. He said he’d like to see normalcy return by Easter Sunday, which is April 12. 'Wouldn’t it be great to have all the churches full?' he asked. 'You’ll have packed churches all over our country.'”

Just what we need, more packed "anything" with people who can spread the virus and just substantiate further that the United States leads the world in coronavirus cases and deaths. Vox reported, "Public health experts reacted with horror,' as should anyone with common sense. But Pelosi said it best: "Trump and McConnell 'should not try to hide behind' impeachment excuse over."  She added...


"I think that's an admission that perhaps the President and the majority leader cannot handle the job,"

Yes, an admission, and a confirmed fact. But Pence also put in his one-cent--not even worth two--with this: "Pence blames China, CDC for any delay in Covid-19 response." I don't know how far away this numbnuts sits from the White House maniac, but no matter, he should be aware, and, of course, he is. Pence has just developed his talent at lying by being around Trump for three years. Right now the only truth in the crisis comes from Dr. Andrew Fauci, and Trump is talking about firing him for disagreeing. God help us!

You're on Progressive Street...Where Liberals Walk...