Coming from Washington Post writers, Philip Rucker and Carol Leonnig, "A Very Stable Genius" is the continuing brilliance of those on the inside to portray a mentally challenged Donald Trump... 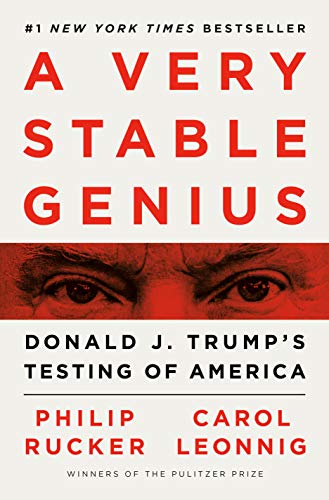 I am two-thirds way through "A Very Stable Genius" and am amazed at the way these two reporters have organized the information on Donald Trump to the extent you actually feel you are in the room where it is happening. It is hard to select something to quote but in consideration of Trump's totalitarian governing approach, there was a part in the book where he gives kudos to Tayyip Erdogan, Turkey's president.

A senior aide describes the two's speakerphone conversations as "un-fucking-believable, like hearing Hitler at a Nuremberg rally." Says Erdogan's voice was chilling, like Satan's, but Trump has long admired the man for his ruthless rule in Turkey and the ease with which he dispatched political rivals. This is unadulterated mental sickness at its worst, when you are talking about the person who rules the freest country in the world.

Jennifer Rubin's Washington Post opinion piece recently headlined, "‘Stable genius’ or dangerous ignoramus?" is a good question but one that has been answered repeatedly over the last few months, with each time Donald Trump opens his mouth. She quotes from one of his recent press conferences...


“And then I see the disinfectant, where it knocks it out, in a minute. Is there a way we can do something like that? By injection, inside, or almost a cleaning, because you see it gets in the lungs and it does a tremendous number on the lungs. So it would be interesting to check that. You’re going to have to use medical doctors, right? But it sounds interesting to me.”

This is the leader of the world's most advanced nation in such a confused state that what he is recommending could immediately kill thousands of people if they took his advice. But it was right after this at a later press conference where the disinfectant thing was brutally criticized, Donald Trump actually showed signs of doubt, both in what he was saying and also from the harsh criticism he received. He quietly left the room without taking questions.

I'm only a puttering psychologist, but are we seeing the first breaking point in the Trump facade, the latest of many that have come down the line, and are sure to eventually push Trump over the edge. A tragic way to have to get rid of a president but the only way when you have the head of the U.S. Senate, lowlife Moscow Mitch McConnell, constantly propping him up. Cody Fenwick, writing in AlterNet said...


"Of course, if Trump does genuinely feel shame, it’s not likely to last long. He’ll likely revert to his vastly overconfident self in short order."

Trump coming off the spool at a press conference...WATCH!


We'll be watching for more signs. After over three years, Donald Trump still does not know how to do his job, according to another piece by Cody Fenwick, this time in RawStory. The writer believes the Oval Office lunatic has contrived this reality show in his head, much like his former show, "The Apprentice," where he interviewed and fired people. In today's show, here's how Fenwick sees it...


"He likely doesn’t have the ability to coordinate all the relevant actors, tap into the expertise of the administration, and craft a long-term strategy for fighting the pandemic and saving as much of the economy as possible. But regardless of whether he could do what is needed, it’s clear that he’s not interested in this hard work."

Trump just cannot shed the carnival barker personality that so often shows him for the idiot he is. Like this...

We're all waiting for the next episode of Donald Trump's new reality show. Don't forget, "A Very Stable Genius," a great read.