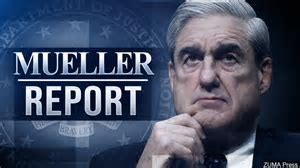 Although the smart political pundits are still saying that the Mueller Report is the least of Donald Trump's worries, an analysis of that report yields the following...


"To be clear, only a summary of Mueller's report, and none of his inquiry's underlying evidence, was released. What's more, federal and state investigations into the president's business organization, his charitable foundation, his payment of hush money during the campaign and his inaugural committee are continuing and could lead to legal troubles down the road."

Republicans, of course, will make hay with the fact that Mueller could not conclusively come to the conclusion that T-rump colluded with the Russians during the 2016 election. Despite the fact that many of Robert Mueller's post report statements have left open the fact that the fat lady hasn't sung yet. The special counsel said he couldn't reach a conclusion on the question of obstruction of justice saying...


"While this report does not conclude that the President committed a crime, it also does not exonerate him."

Now this isn't exactly an indictment of Trump, it is certainly a sorry state of affairs when we're talking about the President of the United States.
at March 26, 2019