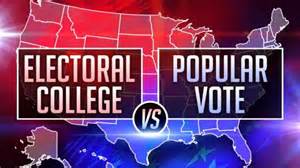 Hillary Clinton beat Donald Trump in the 2016 election by almost 3-million votes. Now to me that signifies there were about 3-million more people who wanted Clinton for president than T-rump. But the Electoral College gave the Oval Office to the idiot. Majority didn't rule and the Trump forces
found a way to manipulate the College. 3-million is no paltry figure and the whole thing should resonate with the voting public. Elizabeth Warren and Beto O'Rourke are in favor of abolishing the Electoral College, other presidential candidates aren't so clear. The EC was dreamed up to give small states equal representation in elections. This concept is, perhaps, outdated today and there is certainly enough evidence to prove the Electoral College is not equitable.
at March 21, 2019