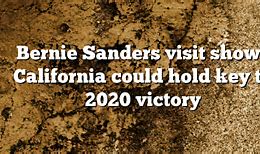 Just received an email from the Bern with the interesting news that "in 2020 California voters will receive their ballots in the mail right around the time people in Iowa head out to caucus." It is important that Sanders' supporters continue to stand behind their man. He took his campaign to California this past weekend with a gungho crowds in San Diego, Los Angeles and San Francisco. Bernie has already accumulated 245,000 supporters in the state.

In San Diego, where President Franklin Delano Roosevelt gave a speech to the people of that city 82 years ago., The Bern attracted 6,000 people; in Los Angeles, 15,000; and San Francisco brought out 16,000, with a total of 37,000. He also stopped by the Islamic Center of Southern California to talk about the recent New Zealand mosque shooting, more encouragement that Sanders is firmly behind gun control for 2020.
at March 25, 2019