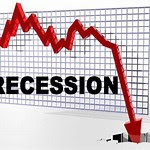 Manufacturing is down to its weakest position since June 2017, most likely due to T-rump playing games with China in the trade dispute. This is the second major program he has failed on; the first was his tax reform law that bombed. Here's one outlook...

And Bloomberg prompts, "Bond Market Flashes Recession Warning Before Round of Auctions," while "investors are about to absorb $131 billion of Treasury note auctions at the lowest yields in months." Yet, Trump has expanded the deficit by $234 billion, which is the largest deficit ever. If we did have a recession, with this deficit "the government would be unable to raise funds for economic stimulus from debt markets due to its already overextended position."

Economists say this is all unsustainable, but if the administration did try to put the clamps on the deficit, we would most likely experience a recession now. Politically there is only one choice for the Oval Office lunatic, but the future won't look pretty.