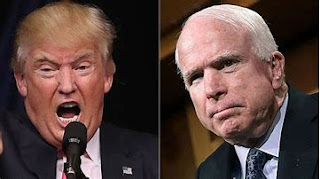 The man is dead, but he lives on through the diatribes of a mentally challenged individual who, unfortunately, sits in the Oval Office. I am talking about Donald Trump's attacks on John McCain. I was not a McCain fan, but I had respect for a man who served his country in Vietnam and in the U.S. Senate. On the other hand, T-rump has found it necessary to deride him on every front, thus, providing the public insight into this most troubled man in the White House. I think Trump hated McCain most for his vote against the repeal of Obamacare. The tragic part of all this is that Donald Trump holds the office of President of the United States. At least for now.
at March 20, 2019