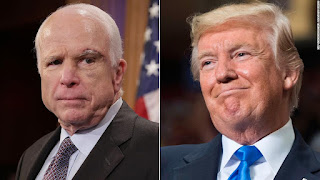 A headline in the LA Times screams: Trump’s obsession with McCain ought to make Americans very nervous." My take is that Trump's obsessions since he took office has terrified the American public, all of which has fallen on deaf Republican ears. John McCain asserted his independence when he wouldn't vote to repeal Obamacare. Donald Trump will never forget that, throwing a hissy fit by unleashing a tirade of derogatory comments about McCain. Not only is it sophomoric, it is just further substantiation that we have a complete lunatic in the White House. The person writing into the LA Times said...


"Only a person who is insecure, cowardly, empty and devoid of any kind of human feelings or emotions would pick a fight with a man who died and can’t answer back. In President Trump’s warped mind, it’s actually a win-win situation."

The highlighted text is the epitome of Donald Trump's character. Pathetic!
at March 20, 2019