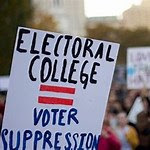 
"a group of people that elects the president and the vice president of the United States. ... When voters head to the polls, they do not vote for the presidential candidates directly, in a popular vote. Instead, they vote to elect specific people, known as “electors” to the college."

And there is the "stinkin'" part, turning our vote over to another body. Because Hillary Clinton wasn't watching the store in 2016, Donald Trump was elected to the White House by the Electoral College. This fact, on its own, should be enough to demand an end to the College before 2020. Republicans prefer the EC 2 to 1 over the popular vote, in my estimation because they can manipulate this body, just like they do in gerrymandering.

This all came about in the Constitution to ensure that smaller states would get equal representations in elections. There has been such a huge increase in population since then, it is time to bid the Electoral College goodbye.
at March 30, 2019