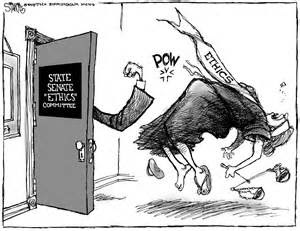 For the last nine years the Senate has issued no disciplinary actions against anyone in the year 2015. So much for self-governing. Every Republican in the Senate--especially Tea Partiers--should be up for displaying no ethics whatsoever in blocking every program mounted by President Obama since he took office. Is it ethical to shut down a program for ideological reasons when it would benefit the American public? I think not.

Since 2007 there were 613 allegations of wrongdoing, 90% of which were simply dismissed. By the same guys who committed the wrongdoing. Only 75 have received a preliminary investigation. Behavior in the institution that is supposed to be held in such high regard is nothing but unacceptable. We can only hope that Bernie Sanders Revolution will not only bring in the President that will lead a new progressive White House but that it will spill over and eliminate most of the GOP Senate and House.
at February 08, 2016