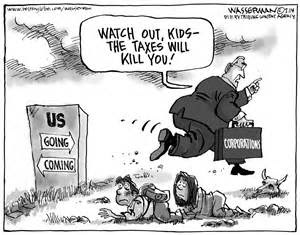 It was an Arizona newspaper headline that said it, "CEOs see schools as a key weakness," but unique as this state is in its stand alone nature, particularly with guns everywhere, I think the issue might apply nationwide. Corporations want our schools to train the people they will eventually hire, but they don't want to spend one penny to support this education. I don't mean with direct donations to the schools; I am talking about them simply not paying their federal taxes.

Here is a chart of corporations that do not pay any taxes broken down by the S&P companies and Fortune 500 companies. Included are corporations like Goodyear Tire & Rubber Co. and Royal Caribbean Cruises Ltd. Americans for Tax Fairness says, " Tax avoidance through offshore tax loopholes is a significant reason why corporations, which paid one-third of federal revenues 60 years ago, now pay one-tenth of federal revenues.

This is one of Bernie Sanders major talking points, to make these companies pay their fair share of taxes again. Bernie has his own list of "Top Ten Corporate Tax Avoiders." It includes: General Electric; Verizon; Bank of America; Pfizer Pharmaceuticals and FedEx. In a way, it is un-American not to pay these taxes when it deprives children of an education, in some cases the only meal they may have all day.
at February 18, 2016