How Bernie Sanders will pay for his programs 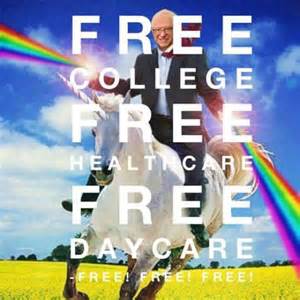 I have read several instances of where people have questioned how Bernie Sanders will pay for the free programs he is proposing, like college tuition, universal healthcare, expansion of Social Security and more. You can see a full explanation of all issues by the candidate here but let me cover the above three in this post. For those of you who follow the Bern, you probably know that his aspirations are quite lofty, but that he believes sincerely in his ability to reach for and attain these goals. And in each case he has a specific solution to fund each program.

What the general public has to understand--something Bernie's supporters already know--is that these reforms have been so long coming that the momentum of needed change is now on their side. The time has come to rid this country of the corporate and wealth control that has been building for so many years now. The people need America delivered back to them and this is exactly what Bernie Sanders plans to do. There will be a fight and ideologues like Mitch McConnell and Paul Ryan, plus the bulk of the conservative right, will have to be dealt with. We can only hope the people will win.

First, free college tuition for all will cost around $75 billion a year. It will be paid for by imposing a tax on Wall Street speculators that would generate about $300 billion in revenue. See the link here for detailed information.

Second, healthcare coverage for every American, paid for by a 6.2 percent income-based health care premium paid by employers, a 2.2 percent income-based premium paid by households, progressive income tax rates, taxing capital gains and dividends the same as income from work, limiting tax deductions for the rich, adjusting the estate tax, and savings from health tax expenditures.

Three, the expansion of Social Security Paid for by lifting the tax on taxable income over $250,000 so that the wealthy pay the same percentage of their income into Social Security as working people. More information here.

A Bernie Sanders presidency will give us the chance to catch up with other Social Democracies around the world that already offer these programs to their people. But it is up to the people of the U.S. to make this happen.