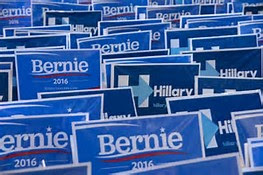 The New Hampshire Primary opened a lot of eyes as well as new sources of support the Sanders campaign didn't know of or at least weren't sure of. Now they know. Okay, I realize the first primary state doesn't reflect the demographics of some of the rest of the country but it was considered a Clinton stronghold dating back to the 2008 election where Hillary Clinton beat Barack Obama.

"Sanders bested Clinton across virtually all regional and demographic boundaries in the Granite State, crushing her overall by 22 points."

As an example, in the under $50,000 income, "Sanders defeated Clinton by 33 points." She won it over Obama by 15 points in 2008. Sanders went on to a 36 point lead among voters without college degrees, and winning college-educated by 13 points. Bernie also improved his older voter appeal by beating Clinton 13 points in Berlin and a sixteen-point margin in Rochester, both older age communities.

Again, a state not representative of the rest of he country but a true test of Clinton's vulnerability.